IFTTT going away, need some pointers

Okay, got the email that IFTTT support is going away. I have some Particle Photons that I trigger using IFTTT schedule recipes. Basically a simple “turn this on at this time” and “turn this off at this time” kind of stuff. I’m guessing that’s no longer going to work? Basically I got into this ecosystem using NCD.io devel boards and their firmware. I extended that stuff so that I use Particle Cloud for some local communication between Photons, but nothing using IFTTT, just straight Particle Cloud.

So assuming I need to do something different from IFTTT, can someone point me to something with similar recipe funcationality and docs for making it work with Particle?

There are a few approaches you can use. First, you can continue to use IFTTT but with webhooks instead of a standard integration. Here’s the IFTTT Migration Documentation where you can learn how to update your applets to the webhook integration.

Another option is to check out Zapier, which is similar to IFTTT but more focused on business integrations.Check out the docs here for how to use Zapier with Particle, as we don’t have an official integration..

Finally, you could probably code this without too much hassle if date/time tracking is the main thing you’re using IFTTT for.

Thanks. I had already looked at the docs, but it seemed mostly geared toward communication the other direction. I can look closer, I suppose, but was hoping for something a little more tightly geared toward what I’m doing.

As for coding directly, yes, I could. But keeping track of time accurately is a kind of annoying on devices like that, or at least that’s been my experience. I also use IFTTT button widgets to override the timers and control things manually on occasion. It’s actually always worked fairly well for me, so it’s a bit of a bummer to have to go changing things. Yes, I’ve seen IFTTT lags by a minute or two sometimes, but that’s been the extent of it.

I assume you are using an IFTTT timer or button applets to call a Particle function to trigger something on your Particle devices?

That’s later on in the documentation under Calling the Particle API as an IFTTT service.

Yeah, I see it now. That’s a somewhat annoying way to have to do it compared to how it worked before, but at least there’s an option I guess. 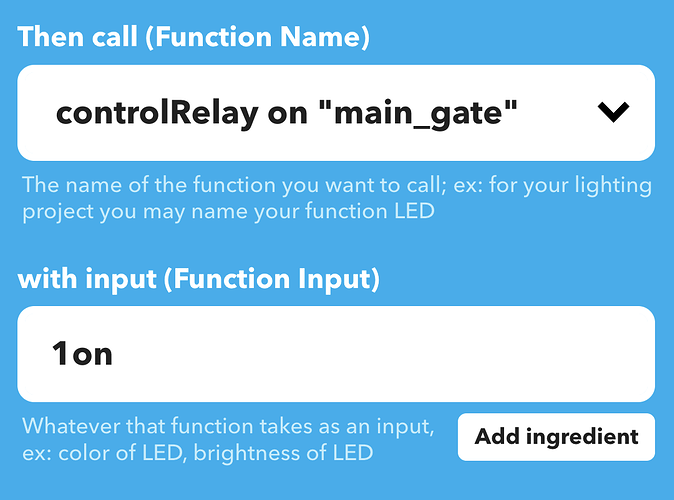 And I get that I’m using the device ID instead of “main_gate” and whatnot, but this part confuses me:

What should that line actually look like for me?

Nevermind. I think you have an errant line in there:

“name” is the name of the Particle event to publish.

Not sure why that’s in the doc other than maybe it got cut/pasted from somewhere else. My line should be:

I have it working now. So now it’s just plugging and chugging to recreate all my recipes.

Oh man, I just realized the other problem with this: loss of name indirection.

With the previous setup, if a Photon went bad, I simply had to flash a new one, remove the old one from my Devices, and name the new one the same as the old one. No need to update the IFTTT recipes. Now I’ll have to go update every recipe that talks to that device.

Yes, that’s a copy and paste error from the sending an event example. The fix should be live in around 15 minutes.

I am appreciative of the documentation. That error just broke my brain into thinking I needed two different things in that line, not just arg: argument, though in retrospect it should have been obvious. But at least I found an error for you that should help clear things up a little for the next person.

Any chance we can get a way to make these calls by device name instead of by DeviceID? If we could get that back then everything still works as it did, even if it’s a tad more convoluted to setup. And that indirection was super-useful.

Hi, not sure if to start another thread or comment here, apologies if incorrect. I’m in same position, I used ifttt to call a particle function, called ‘lamp’ with the input ‘toggle’. Worked great from old integration. Now the move to webhook.

I’ve copied above, I get an event fired in ifttt with all signs it worked with the device and bearer field/token, no function on photon is called though

I’ve got {“arg”:“toggle”} in the applet Body field

Here is an Example I created with Button calling Webhook 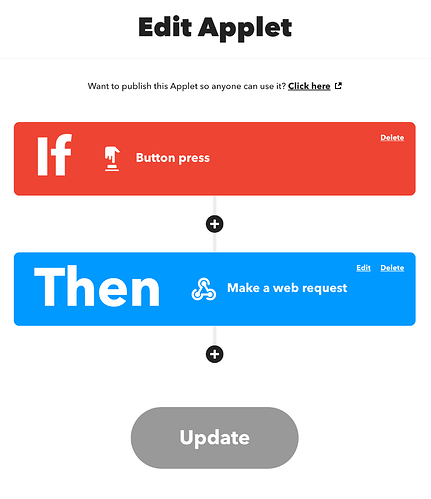 Make a web request with JSON

Make a web request with xxx-www-form-urlencoded

Champion! Not sure why honestly but the xxx-www-form-urlencoded method works a treat.

Thanks very much for the assist, cheers

This is pretty much what I want to do as well, however no idea how to get a permanent Particle API access token?

You can create a non-expiring token using the Particle CLI:

Or from your browser:

Thanks, that worked, however another issue. I’ve gone through the thread of this post and here… IFTTT | Getting Started | Particle on how to Call a function, but not too sure why I’m getting this error (see attached photo)

What do you have in the Body box of your Web Request configuration?

Even if your function does not require arguments you should specify an empty argument:

You have square brackets [] in the Body field; they must be curly brackets {}.

Na, still failing. So to be clear, the action I want to send to my 4-channel relay Particle board is “3on” which I have at the end of the url field i.e. https://api.particle.io/v1/devices/<redacted>/3on
and also have it in the Body field as seen in previous screenshot. I have also tried the {“arg”:“”} which also failed a 404 error.