I have a Particle Photon collecting data at intervals between deep sleep mode and have recently had issues with it going offline (not crashing) at random points. When it goes offline it is has a solid dark blue LED and is instantly fixed when I manually reset it via the reset button. Here is a picture of it. 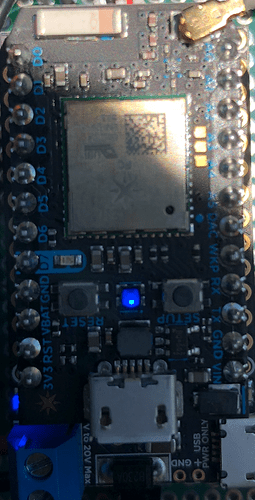 I have 3 of the exact same systems running on the same code/sensors/hardware that have had no issues. This particular one has been doing this every morning (1am-6am) for the past three nights. It has an externa buck antenna as well. I am curious if there is any known issues like this? Thank you!

Is your code engaging Listening Mode and/or using WiFi.clearCredentials()?

The blue LED would suggest LM or missing credentials or WiFi.on() but no connection attempt and the solid would indicate a system deadlock.

So without knowing more about your code it’s hard to tell.

I do not have either of those but I do have these two system features, maybe the Antenna one is having issues?