Photon in DIN rail box with lot of I/O and features (TFT,SD,BT,OneWire..)

Let me introduce myself, I’m an Italian Engineers and DIY passionate found of electronics , controller and process automation especially in the food and beverage area

What I would like to share is a project that I’m running since a while… the basic idea comes form another project where I was engaged so far for home beer brewing automation.
With other beer and technology passionate in Italy we develop a full beer process control and automation based on Arduino Uno.
Since the resources of the most famous controller are very limited for the scope and I would like to add some new requirements I start investigating other MCU with more power and well supported and for many good reasons the choice has been Particle Photon

The circuit is plit in two main boards, base board with docking for Photon, power supply , all I/O terminal block and driver.The top board support TFT display, LEDs, Buttons/encoder, BT module , battery holder and buzzer

At current stage I have completed circuit and PCB design and I have produce couple or prototypes to test, could be interesting for me understanding if someone is interested to such a device na maybe I can produce a mini-serie

Photon will be shelded by up and down pcb.
And din rail automate box usualy build from metal.
So with internal chip antenna signal power will be poor.

Indeed the box is plastic

Indeed the box is plastic

I’m not about your box 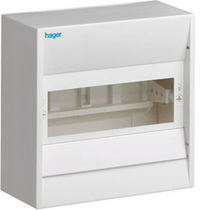 Mine used to be all plastic and during a recent upgrade was replaced by one with a metal door on the front and the rest in plastic.

As it is within 2m of the WiFi AP, I guess the signal should get thru…

Mounting an antenna on the outside of a metal box, may not be the best idea - for overall mains isolation(?)

In your original photo above, you could consider locating the Photon header on the underside of the top PCB to avoid messing with the Antenna stuff or maybe use a P0/P1 to reduce costs and place it beside the BT module.

Is there a plan to sell this?
Would love to see the finish product

Hi @fotoKrille
yes I’m evaluating the opportunity to sell , first application could be home beer brewing controller but as reported in the introduction the platform is so general purpose that could be sold “stand alone”

What do you think about? What kind of applications can be developed ? Anyone interested ?

In your original photo above, you could consider locating the Photon header on the underside of the top PCB to avoid messing with the Antenna stuff or maybe use a P0/P1 to reduce costs and place it beside the BT module.

this is a good suggestion , I think about it but you should also consider extra circuit to add USB support (where to place connector?) and surrounding ciruitery

I like Redbear DUO and I have pledged on Kickstarter… waiting for the delivery !
I’ts a nice piece of HW …all in one…indeed little bit expensive… if i put together STM32 ARM M3 MCU + low cost wifi module (ESP8266) + low cost BT module (HC-05) the overall cost is much lower, off course the integration in one SoC has a value !!

We are looking for
• 4 digital inputs

about analog IN the controller can mange 3 NTC resistor, OneWire (digital) bus , Analog Input by configuration