New Asset Tracker Kit -- Is it available w/o the Electron?

It would be great if Particle would offer up the new asset tracker w/o an Electron for those of us who already have several but would like to get the updated GPS design and form-factor.

I already have 3 Electrons and 2 Asset Tracker kits, I don’t really need a 4th Electron, saving $50-60 on the price of the new kit would be fantastic.

Though for reference I have been successfully using my old asset tracker kit, w/ external GPS antenna, as a vehicle tracker for over 6 months. The device stays powered on (and charges the lithium-ion battery) when the vehicle is turned on–Every 2 minutes it provides position, interior temperature ,and lithium ion SoC updates to a custom API. When the vehicle is turned off it will go to deep sleep, running of the lithium ion battery, until the vehicle is restarted (power is applied) or the deep sleep timer expires–the timer is initially set for 1hr and increases by 1hr each time until it hits a max sleep time of 12hrs – That way I always have a position update for the vehicle which is within the last 12 hours… it has come in handy many times when I forget where I parked (I live in a crowded city w/ street parking and might not use the car for days) or for when the car is towed which has happened at least once so far! I also use the position data w/ a Python script to email me when the car’s last position is on a street cleaning street and so must be moved early in the morning.

Let’s see what @Dick has to say

I second this, I would buy the new asset tracker also if I didn’t have to buy another Electron with it.

I second this as well. I would love to try the new asset tracker but I don’t want to have to need to buy another electron, as I already have two.

I would also like the option to buy the asset tracker without an electron.

Yes, please consider selling it separately. I have two available Electrons that are not being swallowed up by any projects at the moment. I have one of the old Asset Trackers, but wouldn’t buy another. With the changes however, I would definitely buy at least one if I didn’t have to get additional Electrons.

I would also be really interested in buying the tracker as without the full kit, I have 2 electrons currently unused that I would love to turn in to tracking devices.

As of right now, we don’t have the option for the asset tracker without the electron, but this has been requested quite a few times before. I’m gathering all of our requests and will inform our operations team about this with clear numbers. So if this is something that you’re interested in, please comment or “like” this post so I have some numbers to tell them in a couple weeks.

Thanks all for the input! It’s really useful to see what people are wanting!

i would buy 1 asset tracker kit without electron.

@kmmonk , I think this should not be a question of how many. People do want it.
We had this discussion about all Electron kits in the past several times back at the time with @christine and @Steph and it was always said, once we got the current stock sold it’ll come, but that never happened.
New attempt, but without delay, please

I could dig up all the threads that we collected back then and repost the links, but Particle may also take my (our) word for it.

Also very interested in one without the Electron. When I saw it (via the email), the first thing that came to mind is “this is perfect - I want one”. Then I saw that it came only with an Electron, and since I have one already – I closed it sadly hopping it would eventually be sold stand alone.

I’ve mentioned this many times over Twitter since the Asset Tracker has been a thing. Do it!

Like button hit above, so yes V2 version of the shield to replace my V1. I also have a feature request, for the V3 version of the Asset Tracker could you add a voltage regulator? Normal charging voltage in a 12V automotive system is 13.7 to 14.7 Volts. On my V1 board I used the Proto area to add a voltage regulator in order to protect the Electron’s regulator, that is no longer possible with the new board so I will have gin up some off board solution.

That's an interesting behaviour. You are correct, the PMIC is rated at 17V max. We have tested the Electron to operate at 17V as well. Due to the size constraints of the PCB, there isn't enough thermal dissipation available. This is the reason we have capped the max input voltage to 12V so that the operation is guaranteed to run cooler. You can definitely run it above that voltage but you may run into overheating. Having said that, the PMIC has an inbuilt thermal shut-off, so it won't destroy…

These might be of interest in the short term. They’re switching buck converters, so they’re much more efficient than a linear regulator. And they’re small, so they can go just about anywhere.

I’ve used these in the past by setting the output voltage, shrinking heat tubing around them, then filling the ends with generous amounts of silicone sealant. 2 wires in, 2 wires out. clean. They only regulate DOWN, which may be important to you. They won’t boost a 3V supply to 12V or whatever, they only drop higher voltages to lower ones. 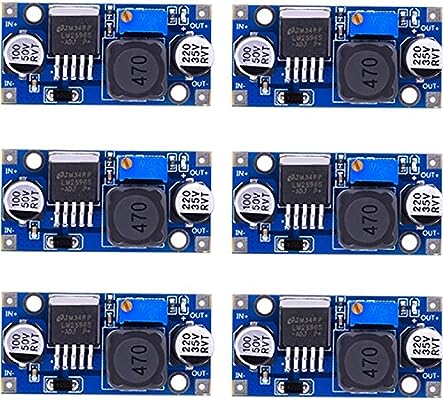 I like that idea, I will give it a shot.

@naikrovek hi, i use those eboost bucks and they work well. however, when you talk about sealing them up that kinda goes against my trust level of these things. particularly in situations where vibrations might affect the settings of dial on the pot. i’m not saying they would move just that they could and for me i’d like to be able to test output once in awhile. i have not used them in projects that are subject to vibration, but if i were, i would allow for checking output at least until they have shown no issues.

Actually I meant this post (as Kevin is is @kmmonk)

Hey everyone, As of right now, we don't have the option for the asset tracker without the electron, but this has been requested quite a few times before. I'm gathering all of our requests and will inform our operations team about this with clear numbers. So if this is something that you're interested in, please comment or "like" this post so I have some numbers to tell them in a couple weeks. Thanks all for the input! It's really useful to see what people are wanting!

To make this post stick out a bit more I marked it as the solution post for the thread - as this is the best option to actually “solving” this shortcoming.