Hi
I have used the following code with Particle Electron Asset Tracker before. But when compiling for Tracker One i get the following error. When I try with firmware version 3.0 or below, code compiles and flashes, but the event doesn’t get triggered. 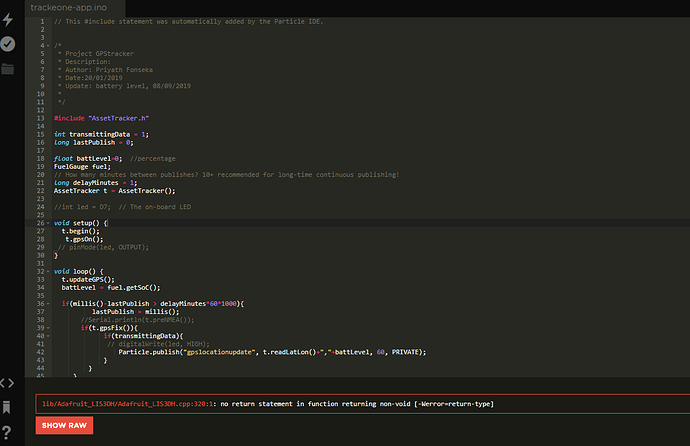 Have you tried searching the forum for this issue?
When you experience an error chances are that someone before you did so too

This is the error that breaks the build And here is the culprit [image] The function signature promises to return a bool but the function never does. @Colleen, could you please also take on this library to get repaired? As it appears there is no contributor’s repo to file an issue. library.properties only provides a link to the original Adafruit repo where this issue was already taken care of but never made it into the Particle libraries repository.

Thanks for that. I see that it is the exact same error as I got. But I am not clear of the solution. Do I have to edit the cpp file to return true or is there any other thing I have to do?

Do I have to edit the cpp file to return true or is there any other thing I have to do?

I would use the AssetTrackerRK library instead.

Neither library can be used on the Tracker One. You should instead start by using the Tracker Edge firmware, which includes all of the libraries you need.

Hi
I will use the AssetTrackerrk thanks.

But now I can’t do a simple publish

Please see the below images. The publish works during setup and for about two loops. But then it doesn’t work. I cannot see anything wrong in the code as well. 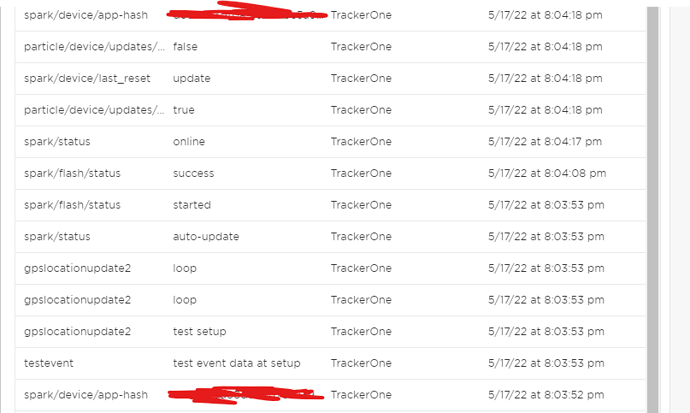 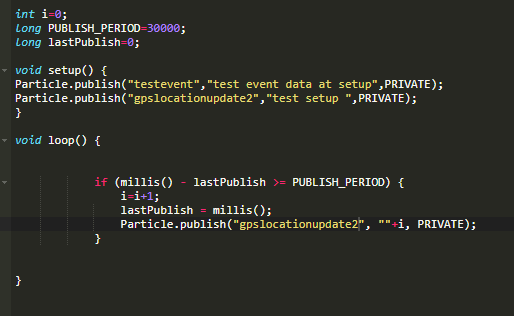 The code you pasted is not the same code that is in the event log, because the log shows the event data being “loop” not an incrementing counter.

Almost certainly the problem is in how you’re rate limiting. The code above looks correct, though the long variables should be declared unsigned long

Note how the two events with loop have the same timestamp - they did not go out 30 seconds apart. Also, you can send 4 events at a speed greater than one per second, but any after that will be throttled.

I’d guess there is a bug in your rate limiting code causing it to send on every loop, and because of that you’re continuously violating the rate limit, causing no events to go out after the initial 4.

With the publishing, the issue was every time i flash using web IDE, it gets over written by the default firmware. I marked as development device and it is working.

Can you help me with the tracker-edge firmware?

I downloaded the zip, but don’t know how to flash it to the device. Is there a way I can do this via Web IDE itself? In firmware section in Particle console, it shows tracker-edge-17@3.2.0.bin and it flashes the v17 firmware when I add the device to the product but I don’t know if this is correct or not.

Appreciate your patience with me.

I am happy to say that I have flahed the Tracker One with the trcker-edge firmware.

Now I need to publish the coordinates periodically. With the attached code when the tracker is not moving, the callback function is called every one hour and when moving around every 10 minutes. 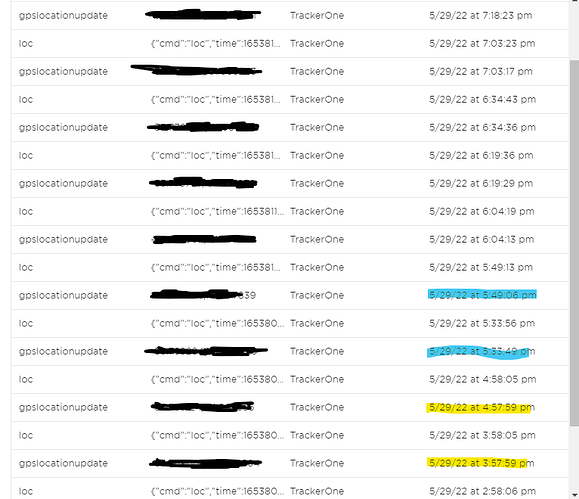 Where can I change this time durations? 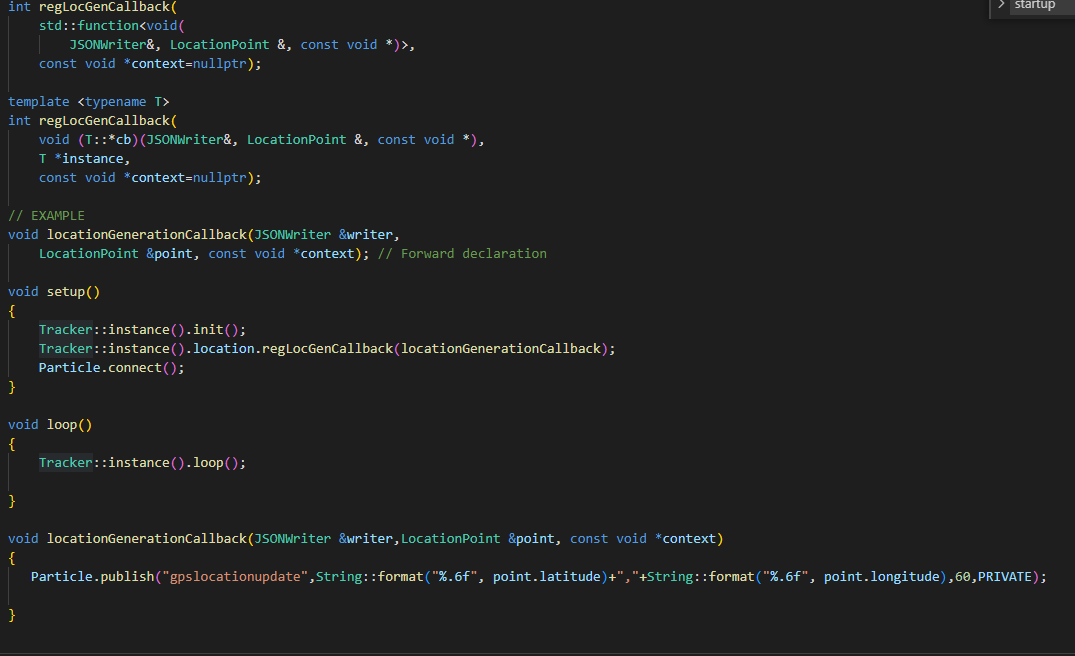 You’d want to change these settings via the tracker dashboard (not in code). 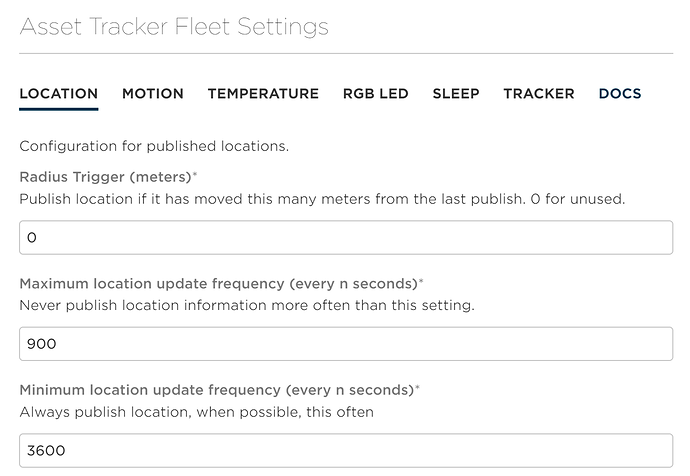 (the Tracker belongs to one product. Doesn’t belong to a group and marked as for development) 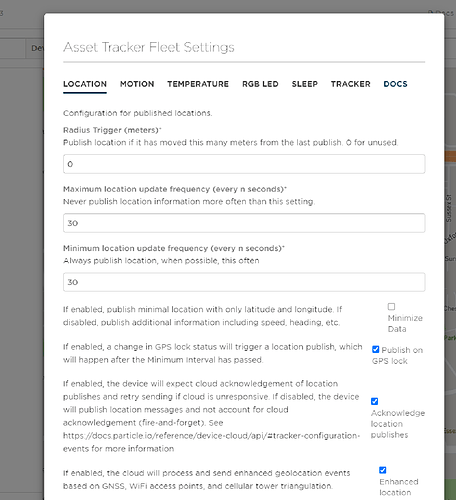 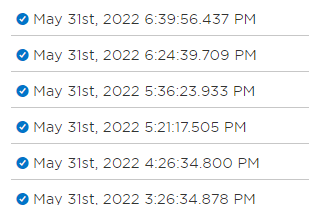 I found these two and played around, but doesn’t seem to work as well. 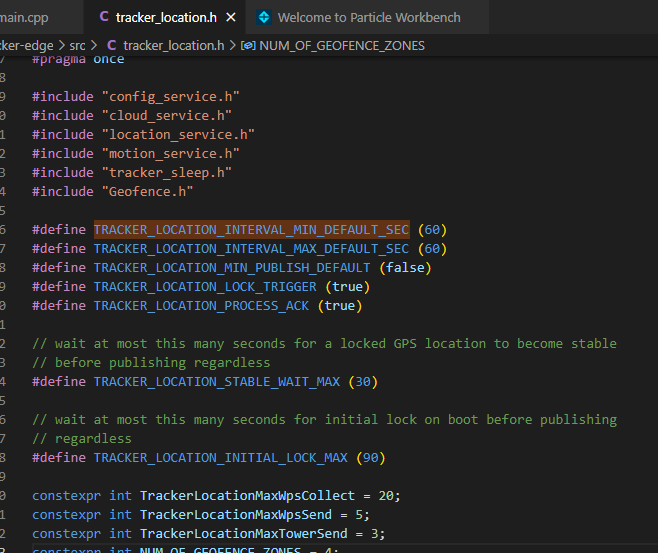 the Tracker belongs to one product. Doesn’t belong to a group and marked as for development

Not sure what you’re saying here. Is it marked as dev device or not?
If it is it won’t obey to the fleet settings (IIRC).