I tried hooking up a wireless power receiver (5V-1A) to the Vin and GND pins on the Sparkfun Battery Shield for Photon, but noticed an issue.
This input power works fine when there is no battery hooked up. But the moment I hook up a battery (LiPo 2000mAh), it seems to interfere with the input signal and doesn’t charge at all.

If I hook up a microUSB cable to my Particle Photon instead of the wireless power receiver, it charges as expected.

I would isolate the photon and test the wireless power receiver with the battery shield to see if charging works well first.

@anthonyngu, if I understand correctly, you are connecting the charger to the “jack” input (JP1) of the Sparkfun board. You MUST do that since there is a protection diode between that input and Vin on the Photon. If you have no battery connected, then all works as expected. WITH a battery connected, nothing works. Correct?

What happens if you take the Photon out? Does the battery charge ok? If it does then it looks like there is not enough current to charge the battery and power the Photon at the same time.

I was not. I was actually connecting it straight to Vin and GND. (the documentation said that it should work, but it looks like I missed something).

If I take the photon out it, doesn’t seem to charge the battery properly.

Do you know how to solder two wires to the Barrel Jack footprint shown here? I’m not familiar with it… 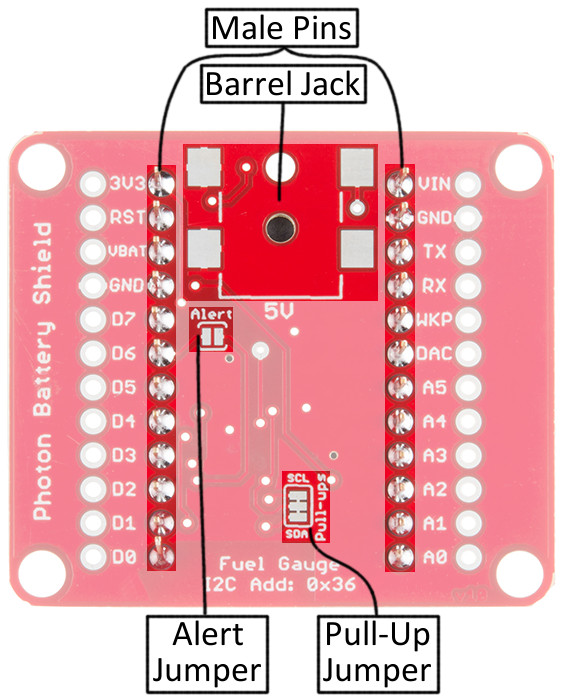 I had a spare microUSB cable lying around, so I ended up just splicing it into the VIN and GND cables coming from the wireless charging receiver. This fixed the issue and now it charges the battery using the shield + wireless charging without the interference.