This is my first time using the Particle Photon, and i have 2 copies with me

I wanted to test out the serial monitor in the Particle Dev and so i applied a basic code as posted at the bottom of the post.

My port is detecting the photon but it is not connecting and there is a flash of blue outline at the “Enter string to send” field upon clicking connect.

I’ve tried with both Photons and i’m unsure if there is something I am not doing right.

This is my code:

What OS are you on?

Can you connect with another serial terminal like PuTTY?
Does adding some delay(100) in loop() change anything?
Is the COM port selected in Dev the one your Photon got assigned in DevMgr?

Does adding some delay(100) in loop() change anything?

I added but it didn’t change anything

Is the COM port selected in Dev the one your Photon got assigned in DevMgr?

Yep, both assigned to COM5

(I have also tried using other wires just in case)

Can you connect with another serial terminal like PuTTY?

I am still learning how to use this now, will get back ASAP

@ScruffR @Arunn I had this same issue when I upgraded Photons to firmware 0.6.0 where the serial monitor app would not work in Particle Dev anymore. It would work with TeraTerm Terminal app though.

No com port being assigned to my (photon) devices

@avtolstoy I ran the app to uninsall previous Photon drivers and it successfully completed. I then rebooted the machine. I tried to run the app again but it said since I’m running Windows 10 no drivers are needed. The serial monitor app in Particle Dev will not open up the Photon anymore. I used Zadig to change the drivers as shown below to get Particle Dev’s serial monitor to work with the Photon again. Should there be 2 listings when the Photon is plugged in as shown below? [i…

Can you connect with another serial terminal like PuTTY?

It works with PuTTY! Thank you so much for the help!

So does that mean i wouldn’t be able to use Dev? (Just asking

Can you explain how PuTTY works? I’m having the same issue as Arunn.

I also installed the latest version of Particle DEV on a new Macbook running Windows 10.

The serial monitor in Dev will not work but TeraTerm serial does work.

Last time I had to use Zadig to change the Particle device driver to get the serial monitor in DEV working again. I think I posted this in an early post in this thread.

Currently I just use TeraTerm for serial monitoring since it provides lots of fexibility.

Can you explain how PuTTY works?

There is not a lot to explain.
Select Serial interface, set your COM port and hit Open 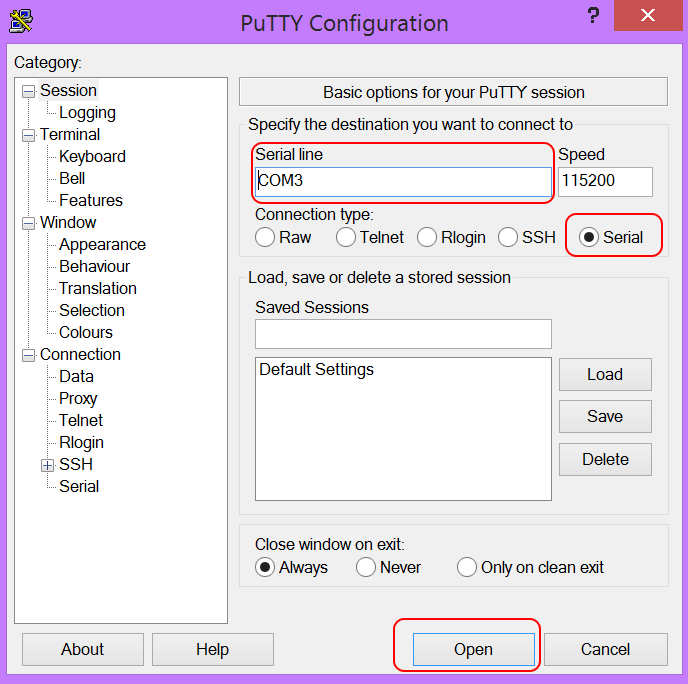 I cant see anything in serial port!
even when I use PuTTY

I found that after Updating the Photon to firmware 0.6.1 the serial monitor in Particle Dev works now when before I needed to run Putty to see the serial output.

I have the same problem, serial monitor is not working in the Particle Desktop IDE, so I need to use Putty or simply the serial monitor in Arduino (I checked, photon is working with both but I would like to use the on Particel Desktop IDE).

Did anyone find a solution?

@marcusone, the Particle team is focusing on the new Particle Workbench which is intended to replace Dev.