I want to use my internet button as a light switch, so I want it mounted to the wall. The solution? Print a case! With screw holes! I figured I might as well share it just in case anyone else wants to mount their button to a wall, or even just wanted it to be a bit more protected.

This doesn’t explicitly do anything about keeping the clear dome on, but if you make the USB cable come out the top it’ll keep it in place, but I want it to come out the bottom, so for now I’ve just got it taped in place.

If anyone has any idea for an elegant way to make it say on, let me know. Otherwise I’ll probably just add some springy tabs that grab onto the ridge around the edge and let it snap in place.

Awesome, thanks for sharing!

So awesome! Glad to see you’re using the PCB hole. The lack of attachment feature for the clear dome was all me- sorry! Late addition to the design, didn’t have time to iterate a snap feature. My current solution’s to add double-stick tape to the edge of the translucent piece. Works like a charm.

The other wall-mount fixture I have in mind (but haven’t made yet) mates to the buttons themselves like the snap-on button caps. Single piece of plastic with four of these features on it and some screw holes: 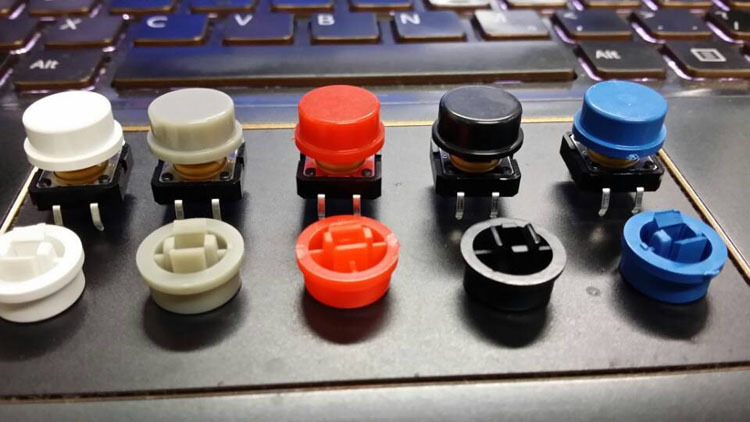 Grabbing onto the switch posts was my original plan, but I was planning on using a set screw because I wasn’t sure I could make some thing that was flexible enough with the plastic that I’ve got in the short profile that I wanted.

I ended up solving my problem with the springy tabs, grabbing onto the ridge of the clear plastic dome:

I’ll get a real picture when I get home.

It’s working really well, I’m actually not even bothering with the inside screw anymore since the tabs hold it together. I’ll probably round off the tops of the tabs eventually since they’re slightly annoying as-is, but for now I’m working on making my code more reliable. An internet powered light switch isn’t too useful when it looses its connection to the internet.

Do you have a picture of the “add double-stick tape to the edge of the translucent piece” that you did to stick it on a wall?

Oh, actually meant that’s how I attached the clear dome to the diffuser piece of plastic. However, I have used the 3M command strip velcro stuck to the underside of the headers. It’s on a diagonal so the tabs stick out between the buttons, as this photo totally fails to illuminate. You can see that I’m also using the button caps to give it a little extra height.

I’m trying to do the same! I will probably print my own case to match the wall interface.
Did you find a step file or a precise blueprint of the internet button?

If you email customer support at particle, they’ll send you the

I finally finished my version. It may be a little bulkier, but there is a ring that makes sure the dome stays on. It also doesn’t have a mounting hole since my original intent was to use the velcro double-stick tape. The headers on the bottom are accessible, and I put in some “channels” on the bottom in case you want to run wires to those headers.

The Particle Internet Button is a fun little device on a horizontal, flat surface. However, I wanted to mount mine to a wall. The "bubble" is loose, so it wouldn't stay on in a vertical situation. This aims to resolve that issue. It also allows...

double-stick tape to the edge of the translucent piece. Works like a charm

Thanks for making this. It would’ve been a good addition to the regular kit. Now I need to find a printer…