Hook: Your Entry to Smart Home

Lemme take this opportunity to introduce Hook to you. Hook is finally ready to get out of my apartment and into the real world.

Hook is a RF-to-WiFi hub. It connects 315/433MHz RF devices to the Internet.
Hook supports most RF devices (anything that comes with a remote). Examples are remote controlled outlet switches, bulb sockets, LED strip and motorized window blinds. Hook works by replicating the accompanied remote control to your phone.

We want to bring this tech to the world because it enables home automation at a price never seen before! Hook converts inexpensive remote controlled outlet (<$5) into a $50 smart outlets. This allows more things around the home to be controlled with your phone for much less $$.

You can learn more about Hook at www.gethook.io and do check out our demo video. If you like, please consider signing up for the mailing list.

Before we go out and test this idea in real-world, I would very much appreciate if the community has any feedback, questions or general comments for us! We look forward to hearing from you.

Check out our latest teaser

This goes without saying. Hook is Spark powered.

Very cool! I can’t wait to back your project on Kickstarter!

congrats! that is awesome.

Hey, I was looking at Spark projects for inspiration for mine, and saw this project and thought the project looks cool. Then I saw that you go to UW as well! I am a TMMBA student graduating this quarter, and we are working on a project for the UW Business Plan Competition! I guess we were both inspired by Spark. I would love to meet up to talk Spark and Home Automation.

@rahilj, @simnick I didn’t know you all were so close! Hello from SLU

Absolutely, would love to talk more. Lets take it over email.
@harrisonhjones, that’s great to know! I didn’t realize we have such an awesome spark resource so close to us!

If you could join our Thunderclap campaign on Facebook and Twitter, we’d appreciate your support! We’re trying to get the word about Hook out to as many folks as possible.

Hey there! We’d love to help spread the word on this - can you shoot me an email at stephanie@spark.io if you’re interested in some more Spark help?

Another sweet update from Hook Team! 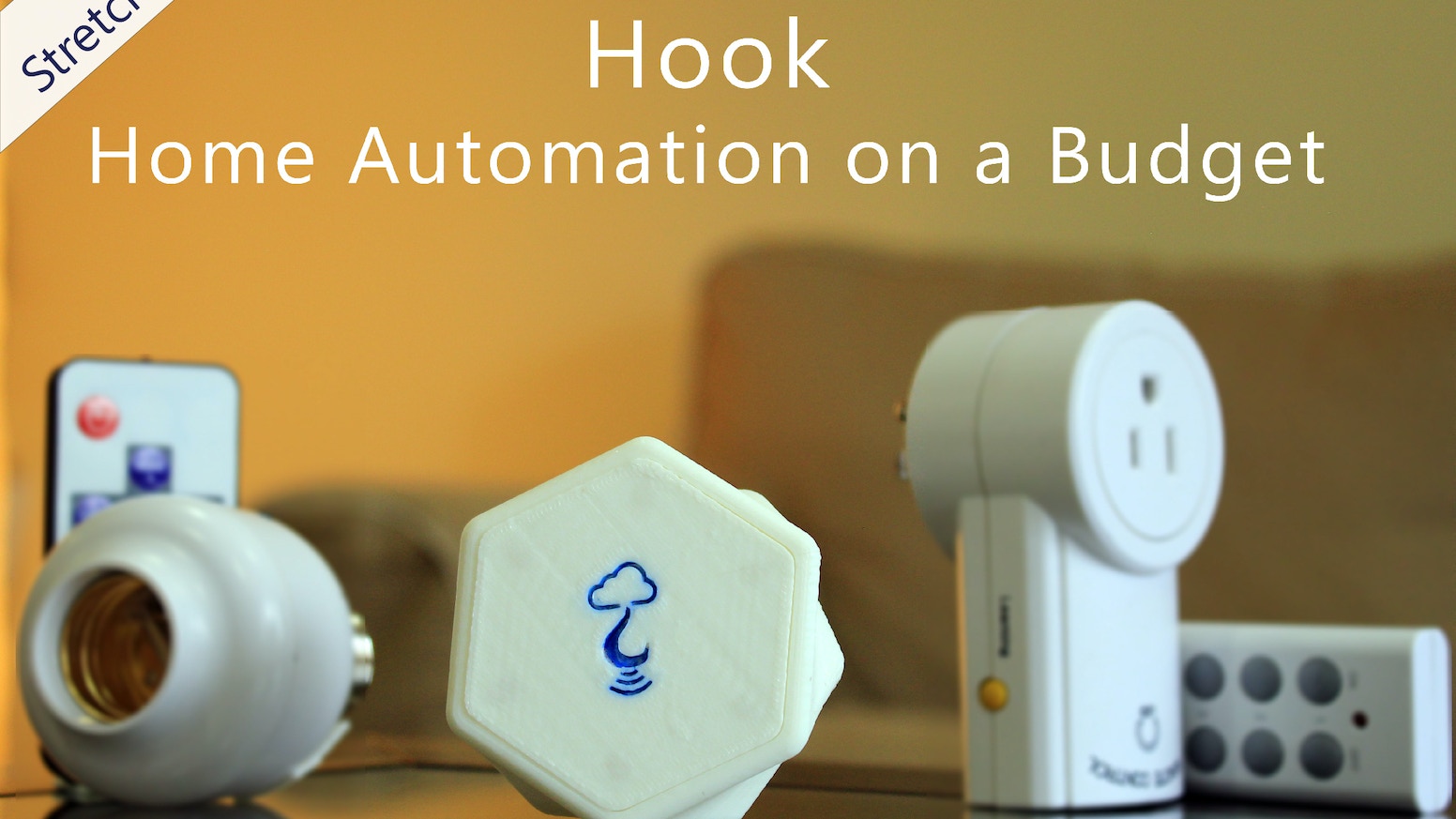 Hook: Home Automation on a Budget

Affordably control your home's electrical outlets and light bulbs from the Internet with your phone and a single Hook!

Hey everybody,
Sorry to necro this old thread, but it seems like the natural place to continue discussion about the now defunct Hook Smart Home Hub and its, presumably, still viable Particle P1, 433MHz transmitter, and 433MHz receiver.

For anyone who doesn’t know, this commercial device worked nicely as a WiFi bridge for 433MHz devices for a few years. Sadly, due to its cloud based infrastructure, functions began to stop working from 2019-2020 and then in March of 2020 they finally shut off the lights because they couldn’t afford to maintain their servers. Along the way there were promises of providing an update allowing the devices to function locally, open sourcing their firmware and software so the community could take over, and finally just providing “Particle tokens” for devices upon request. Sadly, none of this ever came to pass. It appeared that their email servers were defunct before anyone had a chance to request their “Particle token”, as everyone reported that their request email delivery failed and no one has reported any response from the company. The only remaining website is the Hook Wiki.

I am one of the owners of this defunct device, and today I connected to it with the Particle app. I can see that it is identified as a P1. Under Variables “(String) Hook_BUILD04122017_V6_1” is listed. It looks like I have the option to flash the Tinker Firmware and it also looks like I have the option to “Unclaim Device” (text in red) in the settings. Does this mean I have control over the device, and not the Hook team?

Obviously I’m new to Particle, but I’d like to learn and find out if there is a way for myself and other Hook Smart Home Hub owners to reclaim these devices and use them for something similar to what we bought them for.

I’ve attempted to do my due diligence by searching the forums for information relevant to 433MHz and the Hook device itself.

Obviously, from here I have a long way to go, as a total noob to Particle, but I’d like to learn as I get time. So, I have a couple of questions:

I’m thankful for any help, direction, or advice anyone here can provide, and I’m sure other owners of the Hook Smart Home Hub will be as well.

I also have one of these Hook devices, as well as a handful of 433Mhz tx/rx that I have wanted to put to use - now that I have more time on my hands I hope to do that soon!

This is purely conjecture, but I am guessing that Hook has not set up a Product to manage their fleet of devices, since these devices are quite old and predates the Product offering in the Particle Cloud, so you should be completely free to manage the firmware on that device. Once I dig out mine from storage I’ll try to confirm this.

The hook website is available at archive.org. This is the last crawl that shows the website - all later crawls are redirected to hooksmarthome.com, which simply reports under construction in the latest versions, but here’s an archive with content.

It would be great to be able to still use the Hook device locally with a Raspberry Pi.
I am interested in pitching in for this project in my spare time.
Just FYI:
I don’t see any variables or functions in my particle console, the device os is 0.6.1 and device type shows as 1 - P1

I found my device in the back of a drawer. now what?