I approached the moderation group for wikipedia on the creation of a page for the Spark Core; request denied. The new kid on the block has to prove they won’t “burst in to flames - everyone at the same time”.

It really sucks dealing with stupid people who control the gateways to the internet.

I have a plan to get news for Spark Core and send them all to Seekstudio to buy one. Wait, Seedstudio is not an authroized reseller of most major sites; Cnet, Instructables, Tom’s Hardware.

You know there is a reason why most start-up companies fail within the first 5 years; the deck is stacked against them.

Spark Core a newly developed microcontroller with intergrated Wifi networking capabilities will be used in the device that has been developed to stop NSA spying on people around the world.

Now, is there someone on the Spark Team that will contact John McAfee ? If not, just say sickem Bobby and I will make it happen.

Keep in mind, most of the Wikipedia moderators have Aspergers Syndrome, so dealing with people isn’t their strong suit.

Would a write-up by Make, a local newspaper count, or a local BBB press release count?

There concern was no main stream media and asked if I was associated with the manufacture. I agree with timb. Its not the policies that create hurdles its the people who are on power trips and like to see more information added to a serial killers wiki.

I explained to the group that Spark Core was FCC certified for inclusion and only after rigorous lab testing and approval. To no avail, sorry - no page at this time.

The BeagleBoard is a low-power open-source single-board computer produced by Texas Instruments in association with Digi-Key and Newark element14. The BeagleBoard was also designed with open source software development in mind, and as a way of demonstrating the Texas Instrument's OMAP3530 system-on-a-chip. The board was developed by a small team of engineers as an educational board that could be used in colleges around the world to teach open source hardware and software capabilities. It is al Th...

Arduino is an open-source hardware and software company, project and user community that designs and manufactures single-board microcontrollers and microcontroller kits for building digital devices. Its products are licensed under the GNU Lesser General Public License (LGPL) or the GNU General Public License (GPL), permitting the manufacture of Arduino boards and software distribution by anyone. Arduino boards are available commercially in preassembled form or as do-it-yourself (DIY) kits. Ardui...

The Raspberry Pi (/paɪ/) is a series of small single-board computers developed in the United Kingdom by the Raspberry Pi Foundation to promote teaching of basic computer science in schools and in developing countries. The original model became far more popular than anticipated, selling outside its target market for uses such as robotics. It now is widely used even in research projects, such as for weather monitoring because of its low cost and portability. It does not include pe The organisat... This is a non-exhaustive list of Arduino boards and compatible systems. It lists boards in these categories: Where different from the Arduino base feature set, compatibility, features, and licensing details are included. Many versions of the official Arduino hardware have been commercially produced to date: 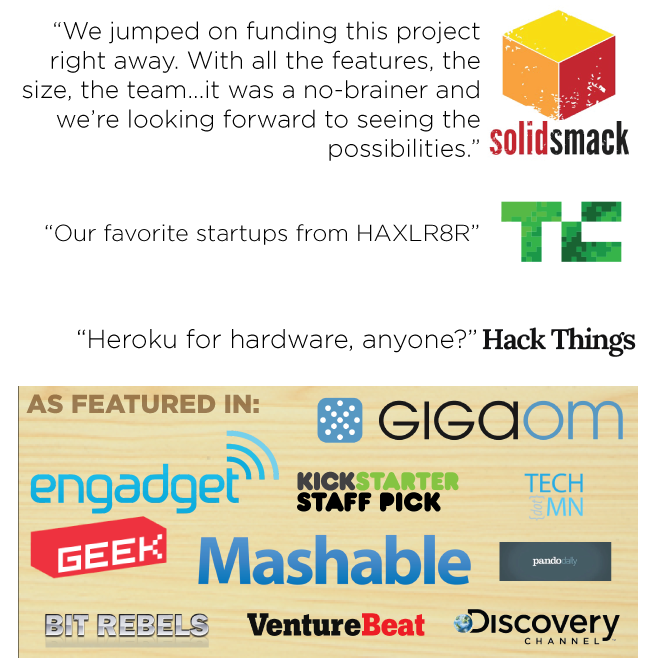 Very good points but, all these controllers are sold at either Frys, Radio Shack, Adafruit, Newark, Digikey.

There is an established corporate supply chain at a time where profits are narrow. Staples announced this week it will be closing 268 stores nationwide; Disney laid off 700 Interactive Software Creators in Santa Ana Calif; Best Buy will be announcing closing 48 stores and scaling back on Geek Squad support. You can’t break in to the store and place them on the shelf they won’t let you.

I really do think Instructables is also going to do the same thing and I don’t dear mention the Spark Core can be purchase at Adafruit’s competitor; SeedStudio. — Wait !

CAN THE SPARK TEAM SPEAK of pushing Seedstudio to put Spark Core in Radio Shacks as they have that supply chain already ???

Radio Shack is closing a ton of stores as well. They’ve also been systematically removing all Seeedstudio products from the Stores, replacing them with direct Radio Shack branded products (custom manufactured for them in China; primarily Arduino shields and accessories).

@spydrop Thanks for pushing this! If it helps, here’s some credibility: A curated mix of kits, magazines, books and merchandise for the Maker community. Please check back as we add more items.

New Today at Maker Shed: The Spark Maker Kit contains the Spark Core and all the components you need to create a fun and functional WIFI-controlled project. http://bit.ly/MeP8uX

And here’s a list of recent big press that we got related to our Nest hackathon, which was of course built around the Spark Core:

This story, by Spark Blog, appeared on Techmeme.

Also, we were actually in Make Magazine (the paper version, if that’s what they consider mainstream press):

Yes, this is true but, they are not dropping the price on these new China products. (Assuming they are adding value to their profits as they do damage control for being the most expensive electronics chain in the world). Disneyland’s Mickey Mouse crew provides their customers with better support

Yep that’s about what I’ve always thought of Rip Shack. They used to have some good stuff… and it was mostly overpriced since I was a kid… but now… omfg… last time I went there I was simply looking for a Micro USB cable for my Spark Core at a reasonable price. First of all, the lady working there pretty much told me they didn’t have any and would have let me leave. I was like no way in hell you don’t have at least one. So I looked around the store and found one in several “areas” of the store CELL, CABLING, JUNK AT THE DESK, CLEARANCE. At this point I had been to several other stores and they didn’t have much of anything… so I was desperate. But they were all so expensive at RS I just had to leave disgusted in local merchants. The lady there was begging me to buy something to keep them in business. I was like… WHHHAt? that’s a hell of a sales pitch. Please buy an overpriced cable to keep me employed and this store open. Wow. How about you learn where all of the Sh*t is in your store and help me not waste 30 minutes of my life looking through all of the isles for something I can’t bear to afford anyway. The last store I went to was Menards (a lumber and hardware store), and I found a small rack of retractable micro usb cables on a clearance endcap in electrical. $2.50 each. Done and done. I bought two. Should have bought them all. We always Radio Shack “Rip Shack” because they rip you off big time. However now is has a different meaning… REST IN PEACE.

Over the past 20 years I have tried to get a job at Radio Shack in 4 different states for the specific reason to work my way up to Store Manager as I knew I could accomplish that because I was so pissed how these “ALWAYS YOUNG STUPID ASSOCIATES” at Rip Off Shack treated me; then I could fire them all.

But, and its big BUT ! There is a reason big corporations hire Young Stupid Employees “PLEASE RIP OFF THE CUSTOMER AND ENJOY THE KNIFE IN THE BACK”. Radio Shack is going the way of Circuit City; Computer City; and Micro-Center and Best Buy should be right behind them.

A lot of stupid people heading for 2 years of unemployment.

Yup, over qualified. You should have told them you’d work for free! lol.

I had a job at a local Kmart when I was in high school, and I quickly got away from pushing carts and being a checker. I moved right on over to running the camera & electronics dept. The store manager once told me that he didn’t want me to help shoppers understand electronics (like why is this item better than this other one) … he just wanted me to front the shelves, and ring people up. He ALSO wouldn’t let me wear my “MacGyver” name tag! Soon after that I quit… I’m not a f*****g sheep, son!

I gave up a really high paying job because my boss told me I was not a team player as I was the only one on the team who did not have a wife & children. What he really meant is that since I did not have bills and didn’t really have to work I would NOT kiss her A** and be her patsy when things went wrong. Boss’ do not want people under them who are smart. Not always the case but, more often or not.

D. Self Employed - Time to do whatever and whenever you want: Priceless. Would not give it up for anything.

I know how we can get people & news at the same time for the Spark Core ! Yes, I do.

May I have a volunteer from the Spark Core Team ?

Or, will you guys have a conference call and decide if this good for your end or not ? Please PM me your decision (If you would) but, Spark Core needs to be on the cover page for the Masses

I worked in a Radio Shack once. I was doing a contract web developer gig (for a different company). I would hang out in the back office of the store and write code. My buddy, who was actually hired by Radio Shack and on their payroll, was busy up front being an employee.

I miss that store. The store manager was actually an electronics nerd. They moved him to another crappy store across town because he didn’t hock their cell phones. It was the busiest store in town until he was moved (and later fired). It’s now some sort of turdy restaurant.

There may or may not currently be a book in the works for the Spark Core. Gets shifty eyes.

I have seen these technical manuals before geared exclusively for programmers and they are great; for programmers. If you guys want to sell Spark Core to only 5% of the masses a “Technical Programming Book will work”.

A simple very basic, “The Spark Walk up the Hill to fetch a bucket of bits” and why, where and how the Spark gets the bits needs to be explained to the masses in the most simplest terms. Hence, “Spark Core for Dummies”.

You already knew that? You must not have because it’s not a “Technical Programming Manual” and is in fact a book geared towards beginners.

I’m currently writing a book for McGraw-Hill on the Raspberry Pi, so I know my stuff.

I’ve been following your forum comments and know you to be very knowledgeable, helpful to others and a benefit to all community members now and future; I am sure of that based on your presence here.

Still doesn’t answer my question of “Anyone on the Spark Team (or others) willing to put their name on” = “Spark Core for Dummies”. Its not like you will have to be technical; just follow the script; basically

Okay, I guess I don’t really understand what you’re asking then. Can you clarify what that means?