So I have plugged in two soil moisture sensors to measure moisture at two different depths. The code I have is below:

So I have power running through the first sensor module but not the second? Any help would be greatly appreciated!

First, it would be good for you to state what your actual problem is. What result does this code give you vs. what you expect? One problem I see right off is that you’re returning val for soil, which causes that function to end; the part of that function that reads the second sensor is never executed. A second problem is that you’ve assigned the same variable, val, to both Particle.variables; you need to have two variables, one for each sensor (also, you should read the docs on Particle.variable, and update your code to the current syntax). 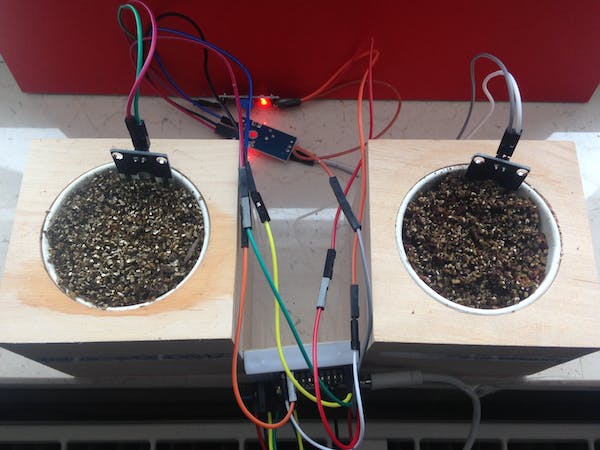 (also, you should read the docs on Particle.variable, and update your code to the current syntax)

Thanks for the replies, I’m still having problems trying to get power to the second module from the digital output of my electron

Thanks again for your help

One problem I see right off is that you’re returning val for soil, which causes that function to end;

@jrbierring, as @Ric pointed out, your code does a return val1; which ENDS THE FUNCTION. The code following the return statement NEVER GETS EXECUTED. I am putting text in caps because you seem to have missed this.

Since you declare val1 and val2 as globals, there is no need to declare your readSoil() function as returning an int. Instead, make it void and remove the return statements from the function. Then in loop() call the function and (as a separate command), Serial.print() both val1 and val2 since you know they were both updated.