I used P2 in my Board for the development.
While running firmware in P2 white light breathing continuously…
After some time light has stop…like our mobile phone hangs while using.
firmware does not work it’s like device hang…
How can I solve this???..

Breathing white means the device network module (cellular or Wi-Fi) is off. Since there is no network, of course there is no cloud connectivity, either.

This mode can only be entered if the user firmware requests this mode. The most common way is to use SYSTEM_MODE(SEMI_AUTOMATIC) or SYSTEM_MODE(MANUAL) and not call Particle.connect().

Can you share your firmware? Does it use sleep modes? That’s the main reason the status LED will turn off, it won’t ever do so by itself. 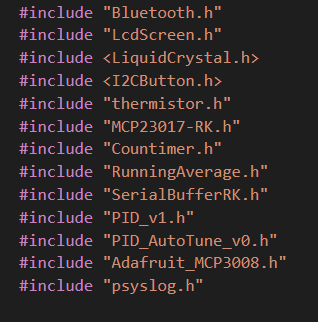 This libraries recommended for my firmware.

Instead of these there is no more modes and library used in firmware.
but Device still hangs RGB LED Still freeze after 2 sec.

→My P2 Device OS is 5.0.1.
I used also serial log for debugging that make problem???
And Is there any solution for this problem??..

If you are using SYSTEM_MODE(SEMI_AUTOMATIC) where is your Particle.connect()? It’s usually in setup() somewhere, but if that doesn’t get executed, then you will be stuck breathing white forever.

Some library examples for sensors go into tight a while loop if the sensor can’t be found. This isn’t recommended, since it will almost certainly prevent the device from going online.

→Now I tried with Particle.connect() but device will stuck with green LED. Continuously green light has glow in device.

→And I connect all the sensors with P2 Board according to library because I used P2 with my device.
In that all the recommended connections are Done.

Solid green? That should never occur. There is a problem somewhere in your firmware or the libraries for the sensors that’s causing the device to lock up, most likely with interrupts disabled.

I’d remove all of the sensor initialization and add them back in one by one until it stops working.

I found solution of this…
In my firmware i used Serial and Serial1 both for Bluetooth Communication that both serial makes problem in device.
→After removing Serial device works normally.