Can't get VC0706 camera library working via ParticleSoftSerial on Photon

I can get one working great via the serial RX/TX ports. I was hoping to get the second working using the ParticleSoftSerial library but I can’t get it to find the camera.

Here is a simple repro that is just trying to get a single camera working via ParticleSoftSerial with DeviceOS 3.3.0: photon-camera-test.ino · GitHub

Currently wired with Camera RX → WKP, Camera TX → A2 but I’ve swapped those as well.

Same sketch/camera works when connected to the hardware Serial1 pins.

Any tips on how to go about debugging this?

Have you tried a slower baudrate?
38400 is the default in the Adafruit_VC0706 library but this may be a stretch with ParticleSoftSerial.

Any tips on how to go about debugging this?

I’d try to communicate with the camera directly and see how it replies.
Depending on that I’d plan my next steps.

to avoid creation of intermediate/temporary objects.

When you say “try communicate with the camera directly” do you mean set up the NewSoftSerial connection and use those APIs to try sending commands and seeing what the response is?

Thanks for the coding tips, I don’t spend much time in the C++ world

There obviously is a function in that library that promises to return a value but fails to do so.

If you post a SHARE THIS REVISION link from Web IDE we can pinpoint the exact line of code. There are several VS0706 libraries and we don’t know which one you’re using.

In order to make the camera accept different baudrates you may have to preset it that way. I don’t exactly know for this model but other devices can store the desired baudrate it should default to after cold boot.

BTW, the datasheet you linked to in your opening post talks about a default baudrate of 115200 which is definitely beyond the reach for ParticleSoftSerial.

When you say “try communicate with the camera directly” do you mean set up the NewSoftSerial connection and use those APIs to try sending commands and seeing what the response is?

Thanks for the pointers on debugging, I know what I’ll be doing this evening

Miniature TTL Serial JPEG Camera with NTSC Video : ID 1386 : $35.95 : Adafruit Industries, Unique & fun DIY electronics and kits and Overview | TTL Serial Camera | Adafruit Learning System talk about the 38400 default baud but also mention that changing baud can be buggy. Maybe my dream of 2 cameras off one Photon is a bit much, an I2C version would be quite nice, maybe I need to go find a similar form factor camera that supports I2C with settable addresses instead.

Well, I’m getting some data back from the camera but it is corrupted, ex:

Which is obviously the info dump from the camera but just not coming through clearly.

I haven’t been able to change baud rates. The PDF documents the command to send but if I open the SoftSerial connection at anything other than 38400 initially I get no data back and the set baud rate command just gets gibberish back if I am connected at 38400.

I even tried a sequence of:

after switching the serial api to 19200 it goes back to getting no data.

I realized in this project I’m going to end up needing to use a reed relay to only have the cameras powered on when I need to take a picture AND I don’t ever need both cameras at the same time.

I just verified that the cameras work if their RX/TX pins are both wired together to the hardware serial pins on the photon and I just have one powered on at a time. Super hacky but it may actually work

I haven’t been able to change baud rates. The PDF documents the command to send but if I open the SoftSerial connection at anything other than 38400 initially I get no data back and the set baud rate command just gets gibberish back if I am connected at 38400.

IIRC you can set the baudrate “permanently” so it should be possible to connect the camera to Serial1 to set and store the desired default baudrate.
After that you can detach the camera and reattach to your SoftSerial pins and start off at 19200.

Can you give that a try?

That Worked! It appears the new baud is honored even after a power cycle.

I did have to fix the Adafruit_VC0706 library, its setBaud19200 command was sending the wrong byte string vs what the PDF defines.

Ok, more than just a day later but here is the pretty simple code for what I actually did: 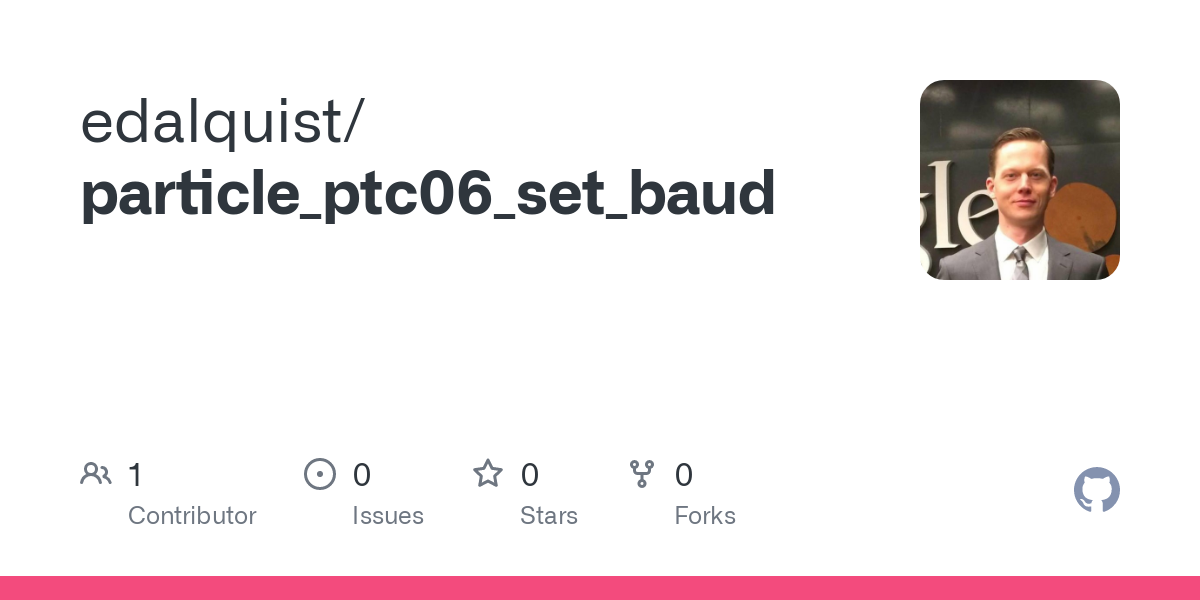 Contribute to edalquist/particle_ptc06_set_baud development by creating an account on GitHub.

Note that this is using my fork of the camera library: GitHub - edalquist/Particle-Photon-Adafruit-VC0706-Serial-Camera-Library: Library for VC0706-based Serial JPEG Cameras with Particle Photon modifications

I’ve published this as an actual Particle library for others to use.