Got a couple samples of the new Particle Antenna - PARANTC41EA - and am excited to take it for a spin in some of the parks where I am having cellular performance issues. 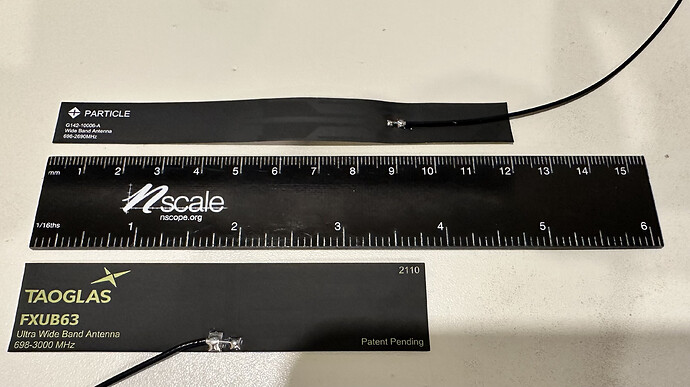 The new antenna is quite a bit thinner and longer than the one that has come with the Boron 402 and 404 and I understand it is optimized for the bands that are most important in North America.

I wanted to start a thread on this as it may be of interest to others who are working in areas with poor cellular coverage. My plan is to deploy this in some parks that have had connectivity issues in the past and see if, over time, there is an improvement.

So, if you are in a similar position, perhaps this thread will help.

There are likely other questions and some of you may have already started testing. Please let me know your thoughts.

My plan is to deploy this in some parks that have had connectivity issues in the past and see if, over time, there is an improvement.

Do you have a “design of experiments” planned by chance? I’m trying to think of a tangible side by side, apples to apples way to determine the difference. Maybe a BRN404 with the standard FXUB63 antenna right alongside a BRN404X with this new antenna, vs a BRN404 with the new antenna and a BRN404X with the FXUB63? By testing side by side various configurations we should be able to determine what the affect is of the BRN404X vs the antenna. Capture device vitals every 1 hour for each in a low signal strength area and capture the Signal Strength and Signal quality values. I did something similar when trying to determine the best antenna location in my enclosure to try and put tangible numbers to it. Just a thought…

When trying different antenna’s in the past, I had similar results with Signal Strength but the quality score from the vitals page was vastly different between two like antennas. One was very consistent whereas the other was a lot of variability. This was almost 12 months ago though and forgot the details.

Looking forward to hearing/seeing more with your results! Thanks for starting the thread!

Ideally, I would do the side by side test as you suggest.

But, the devices that are giving me the most trouble are also fairly remote. So, as a next best thing, I plan to do a “longitudinal” study. My devices report cell strength (RSSI) daily and connect time (a great proxy for cellular performance) hourly. Since I have months / years of data with the current hardware, I was thinking I would compare performance over an extended time (weeks / a month) and compute an average (RSSI and connect time). I also collect events such as missed connection, missed webhook response, 3hours, 1 day , 1 week disconnected and resets (also tied to cellular performance) in a log. So, I could see if these events dropped off with the hardware change.

Practically speaking, this is likely my best way to see if swapping out the hardware makes a difference. Unfortunately, the current partial outage may well cloud these results as many of my devices are impacted.

Open to other ideas. Hopefully, as the new antennae come into general availability, there will be folks who will be in a better position to construct a proper test.

Honestly… it sounds like your test is most meaningful. Even if something translated to a few points higher in a quality or signal strength score, what ultimately matters is the things you are tracking. When I get an antenna or two myself, I may do some quick side by side but checks but generally speaking, I like your test setup much better.

@chipmc
The “new” antenna design would have been nice to know about 6 months ago as we sat spinning our wheels waiting for the new Boron. Now I have an antenna that is roughly 30mm longer than the old design. Not to mention I cannot fold it more than 90 degrees. Again, I have now wasted 6 months waiting for this and it will not fit in my design!

As if that is not bad enough, I just received 10 brand new 404X LTE M1. None of them will connect to cellular even though the old Boron is sitting right next to it breathing cyan.

What an absolute shame.