Hi folks,
I’m a novice and I’m struggling with this simple code.

I have similar code running on a Xenon and it’s working fine. But when I run it on the Boron, it breathes cyan but stops responding to pings and stops doing it’s gateway function. I have to reset it to safe mode in order to reflash Tinker and get it back running again.

The difference between the code below and the working Xenon code is that I’m using the fuelGage function here, but I’m using “analogRead(BATT)” on the Xenon.

Can someone point me in the right direction? Thank you!

This is the ancient (to be depricated) way of writing it, nowadays we’d write it like this

Also, since you are running in default SYSTEM_MODE(AUTOMATIC) Particle.connect() shouldn’t be called in setup().

You should also try to avoid delay() - especially 10000 or more milliseconds - in loop().
Rather go with something like this

I think these extensive delays are actually causing the apparent loss of connectivity where it’s actually only degraded responsiveness due to starving the system process of processing time.

I’d also rather use a global FuelGauge fuel; and reuse that over and over, than constructing/destroying it each time anew.

And finally, instead of two separate events I’d wrap both values in one string and send that
e.g. as JSON string that can easily be parsed by the webhook

Thanks so much for taking the time to look at this. I will implement the changes and test.

I like the idea of combining publishes in one. But even after googling “snprintf” I have no idea how you came up with all of the syntax to make these lines:

I have a lot more to learn than I thought!

To best learn about snprintf() you should first look up printf() which expains the basics.
snprintf() only differs in two points, it dosn’t directly print to an output channel but into a buffer (that’s the s part for store) and the n part referes to a limited number of bytes to store.

But to cut things short, my statement above just injects the values into a string {"Voltage":"...", "SoC":"..."} where the ellipses (...) are replaced with the respective floating point number with one decimal place (%.1f).

I can confirm the changes fixed the problem, thank you!!!

Could you post your working code? I am running into the same issues that you were, but am not having any success. After I flash my device, I am also not able to re-flash it until I put it into safe mode.

Here is my code:

The last message that I see some through is: “About to read V”.

So it looks like the device is hanging on voltage = fuel.getVCell();

So I am not 100% that I am doing this correct… Basically, I have the code in the WEB IDE, then I select Devices on the left, then I can see my unit. At that point, I select version 27 from the dropdown list. At that point, I click the flash button to send over my code (posted above). I see a strange flash sequence, then its back to the “breathing blue”. Still at .27

Any thoughts as to what I am doing wrong? I am starting with the unit in safe mode. This is all OTA…

Just upgraded the firmware to .27 via the CLI and DFU mode. Reflashed the code posted above, and same results.

This is what has been running successfully for a while now (weeks). It is only sending the battery voltage and state of charge % to a webhook (which I then send to emoncms for graphing etc but you don’t need that step).

It sends every 5 minutes, and increments a “watchdog” counter by 5 so the particle variable “watchdog” lets me know how long it’s been since the Boron has rebooted, in minutes.

I am not a veteran programmer, so there may be poor syntax in this example! It does seem to work however.

Jeffpeakmonitor,
Thanks for the code! I just flashed my device with your code, and BAM! Its working! I was worried that I was having issues with the hardware, but looks fine!

Ill let this run for a day or two and add the solar panel to the system tomorrow morning.

Actually, one more question comes to mind… Do you have a solar panel connected? If so, what size and what pins are you using?

The reason why your code above wasn’t working as expected was probably due to violating the rate limit for Particle.publish()
https://docs.particle.io/reference/device-os/firmware/boron/#particle-publish-

NOTE 1: Currently, a device can publish at rate of about 1 event/sec, with bursts of up to 4 allowed in 1 second. Back to back burst of 4 messages will take 4 seconds to recover.

ScruffR,
I thought about that, but I don’t think think that was the cause. The device would never recover and also would not allow a re-flash until I put the device into safe mode.

I’d still avoid hitting the rate limit. Hammering Particle.publish() that much may have unexpected side effects.

Your code above is trying to publish 4 to 5 (on first run even 8) events every 500ms - that’s definetly too much and may at least contribut to other issues.

I started with a 1W 6V solar panel and a cheap 18650 battery, but it couldn’t keep up if there were any clouds or shadows during the day.

I switched to a 5V 2.5W panel from Amazon:
Solar panel link
And 2 Panasonic 18650 batteries:
Battery link
Now it can go a few days without solar at all, and will fully charge on an average day. This is without any sleep mode on the Boron - impressive! I look forward to when the sleep features are enabled.

Jeffpeakmonitor,
Thanks for the links! Better than some trial and error…

Last question for you… Is your panel connected directly to the Boron or are you using a charge controller? If directly connected, which pins did you use?

Direct connected to VUSB and GND.

Again I am no expert- maybe there is supposed to be a diode or something in there, but so far so good for direct connection.

May I ask what battery holder you used for the 2 Panasonic button tops?

I am using 2 individual cell holders from Ebay, zip tied to the bottom of the proto board that came with the Boron.

Update to the system: A 2nd 2.5W panel was added in parallel with the first one because the solar panel didn’t charge fast enough to recover after long cloudy stretches (more than 3 days). This has helped to double the charging speed during sunny times.

Here is a chart of battery voltage during a week of rain and clouds, except for the last day that was sunny: 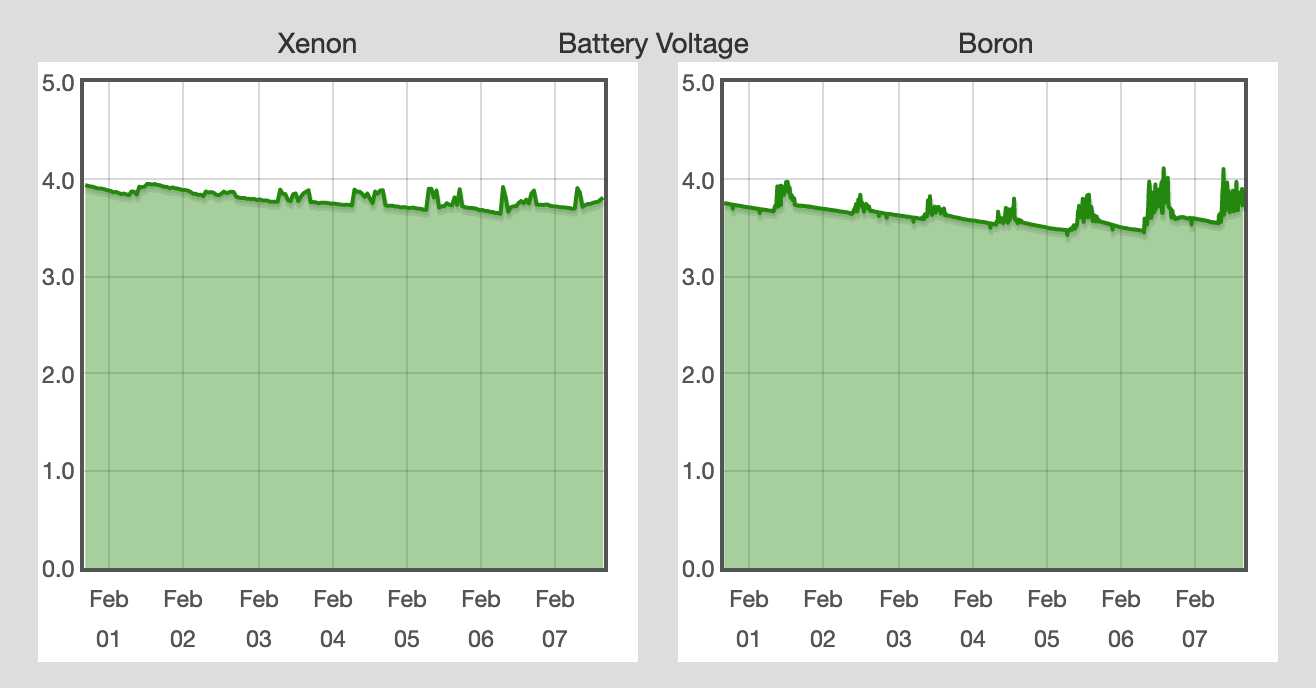