Is there anyone here with RF experience?

I am looking for an RF Transmitter that works on 303.9 Mhz so that I can transmit to a Ceiling Fan. However, I closest thing I can find is a 315 Mhz transmitter:

These wireless transmitters work with our 315MHz receivers. They can easily fit into a breadboard and work well with microcontrollers to create a very simp

I purchased this, and replaced the crystal with a 303.875 Mhz that I purchased from Mouser:

Does anyone have any idea why it wouldnt work? Or what else I can do?

Oh btw, I also took the crystal from the orginal remote and put it on the 315 mhz transmitter I got from SparkFun. However, still no success.

I was just looking at those 315MHz transmitters from Sparkfun today for a project I’m working on. I think it would be VERY handy to have a cheap Spectrum Analyzer… oh, that sounds like an oxymoron? Yeah I thought so as well until a co-worker of mine showed me this little USB HDTV / FM tuner: It’s even cheaper on ebay. Search for “ezcap dvb-t fm”

I was searching for some good videos about it and just happened to run across one done by Matt Richardson of all people:

It seems like there are tons of different versions of these out there… some May work better than others… I haven’t done much research on them: 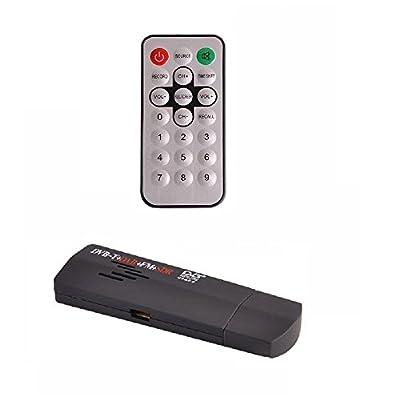 
Interesting that I found this one on my own ^ and then just found that Matt Richardson links directly to it instead of the one he uses in his video. Must be the new kid SDR on the block.
1 Like
BDub December 31, 2014, 2:55am #4

Oh, I got lost in the recommendation of a tool to help verify what frequency it’s transmitting on… which should help you… but also wanted to mention these cheapo 315MHz RF transmitters typically operate in FSK or ASK mode… (Frequency or Amplitude Shift Keying)
http://m.eet.com/media/1157242/925fig1.jpg

And they are not compatible with each other. So you’d want to make sure they are the same type of modulation. This is probably something you can verify with the SDR tuner, but just some googling about your fan remote and anyone doing hacks with it might prove useful as well.

Wow thank you very much for those 2 posts!

I ordered one of those tunners to see if it can help troubleshot.

I’ve Googled the heck out of it with no success.

The receiver should be here Friday!

Just doing some more googling I found a blog that has a custom version of that dongle with a newer chipset and better PPM components. I don’t think it comes with an antenna though?? 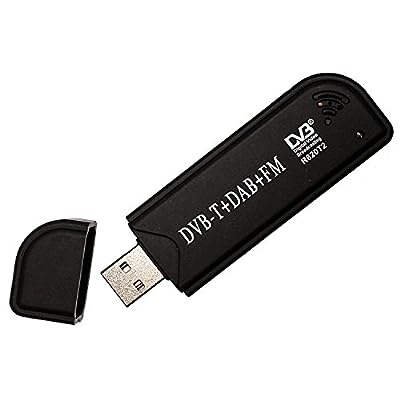 This is an RTL-SDR software defined radio receiver with RTL2832U ADC chip and R820T2 tuner. Tunes from 24 MHz to 1.7 GHz with up to 3.2 MHz of instantaneous bandwidth. Perfect for use as a computer ba ... 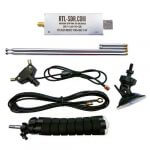 There are several dongle rtl-sdr variants. The R820T is currently the cheapest, but does not have a frequency range as large as the E4000. Reputable stores are shown

I am loving all the SDR talk here! Very cool stuff. A lot of these RF remotes are using IR chipsets with the NEC timing, so you will see AM modulation with a fixed transmitter-on period of around 560us followed by a variable transmitter-off period of 1.12ms or double that. The length of the off period determines if the transmitted bit is a one or a zero. This is technically a pulse-position modulation scheme.

But if you are willing to cannibalize the existing remote as you have and assuming this is a one off, why not just use the remote directly and drive the keypad inputs with some transistors from core outputs?

I just assumed he wanted to keep the remote as an override or something like that, and focused on increasing the size of our electronics toolboxes. Good to know about the PPM scheme… which might explain why this doesn’t work… but if the data output of the remote was hooked to the data in of the modified ASK transmitter, I’m thinking that should probably work. Have you done some reverse engineering on these fan remotes before @bko?

@Carsten4207 can you get the part number off of that IC that’s on the fan remote? Also how did you identify the data output, and do you have a logic analyzer or scope you could throw on it and share with us? What’s the model of the fan as long as we are gathering data

@bko this is a continuation of a project I posted a while back:

I wanted the ability to control my house’s ceiling fans from my phone. When I found the Spark Core on Kickstarter I knew it was the perfect setup. All the fans in my house are from the same manufacturer and they all had a remote so I could control...

@BDub I went on the FCC website and looked up the FCCID from the remote:

Here they have the schematics which states that it uses a Holtek HT12E.

Now looking on the actual circuit from the remote, the chip has a different part number: RH78711-S. Googling this results in basically nothing. Because the pin layout from the HT12E and RH78711-S are exactly the same, I figured I’d sniff the data line with my Saleae Logic 4. Sure enough data came through that matched the Holtek HT12E datasheet.

Basically what the Holtek HT12E does is it sends 12 bits. The first 8 bits are address bits and the remaining 4 are data bits.

Now that I knew what the chip was sending to the transmitter, I was able to write some code which simulates what the HT12E sends out. Because I spliced the data line on the remote (see picture below), I had the ability to use the remotes transmitter (blue wire) to test my code:

And sure it enough it worked. Now I wanted to be able to use my own Transmitter and be able to completely toss the remote

These are Hampton Bay fan remotes that I have. For this actual project I purchased another remote/receiver kit from Amazon: 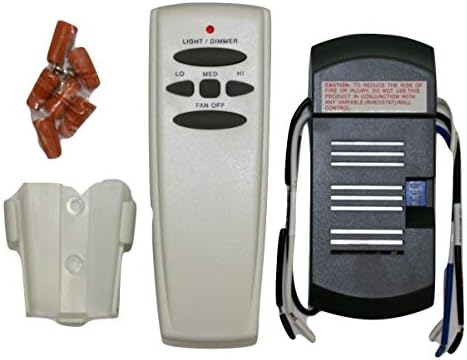 PS. I know I am using an Arduino Nano in these pictures. But I found it easier/faster to reverse engineer the HT12E. Once I get everything worked out, it’ll be used in a Spark Core/Photon project :).

Thanks for the help already guys! The SDR stuff is very interesting! Cant wait to get mine!

This is great! You did really good research here and as you found out the Holtek parts are easy to emulate with pulse width modulation.

It is really good that you got it down to just the radio part of the problem now and given the output of the Holtek part, the radio is certainly simple AM modulation of pulse width encoding scheme. This is confirmed in the schematic where the little NPN transistor Colpitts-style oscillator is shown but as you can see the adjustable coil L1 sets the transmit frequency. You can build your own but the SDR gear will help you tune it.

I have wasted years with RF. Google this:
ESP8266

I have wasted years with RF. Google this:ESP8266

How do you propose to solve the above remote operation of the Hampton Bay fan with a UART to Wi-Fi radio?

I was not proposing it as a solution, more of a work around.

Please elaborate… I’m still not picturing how to use it

One thing that I just thought of @Carsten4207, was now that you’ve reverse engineered the PPM data needed to operate the fan, you could emulate those signals from the Spark Core directly inside the fan, injected just before the demodulator IC.

Yup I could. But I dont like working with the High Voltage stuff. Dont want to burn down the house

Ok just to clarify, I am currently using 415mhz rf. I am in the process of changing it to wifi using afore-mentioned chips.
I appreciate this might not be applicable to an embedded system. I am just pointing out that the wifi uart modules are a very cheap, versatile and secure alternative to rf.

I got my SDR and started playing with it using SDR#.

I hooked up the original 315 Mhz transmitter to the Hampton Bay remote and tested on SDR# if I received a signal. I did. Next I replaced the crystal on the transmitter with a 303.875 Mhz crystal that I took from a spare Hampton Bay remote. However, now on SDR# I dont see anything be transmitted when I press a button. This is on the 303 Mhz and also at 315 Mhz.

To triple check that I didn’t break something while soldering, I put the original 315 Mhz crystal back on the transmitter and it worked again (on 315 mhz).

I think @bko is correct. This is working on AM. This is what I see on SDR# when pressing a button on a Hampton Bay remote:

I will attempt to build my own transmitter to see if I have any luck doing it that way.

The “crystal” on the Sparkfun transmitter is a SAW (surface acoustic wave) device and should have 4 pins and maybe a few more to ground the case etc. Generally they all have the same pinout but it might be worth checking with an ohm meter. Two pins are connected on each side of the device. You might end up needing to tune other component values to get it to work on the Sparkfun device. I didn’t find a schematic on the datasheet but it looks pretty simple.

The waveform you are seeing on the SDR display sure looks like AM! Nice tool.

Its actually 3 pins on those crystals (is that what they are called?).

I just got done trying with this TX I got from Amazon: 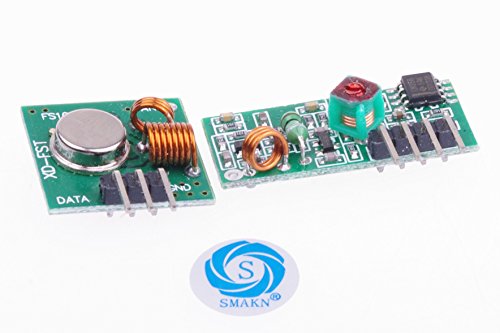 But same affect. Once I put the crystal in from the Hampton Bay Remote it doesnt work at all.

THAT is SO cool! I’m definitely snacking up one of those SDRs. I think I’ll go for this one which has the latest goodies, crystal and a telescoping antenna which can be set to receive different wavelengths better.

I’ll take a look at my Sparkfun transmitter and see if I can figure out what the pinout is… and how it compares to the Murata SAW resonator.

The Murata datasheet seems to imply you can hook this up either way as long as you get the ground pin in the right spot.

I found an app note from Murata that seems to suggest you can use the same output stage for 300-500MHz with different resonators: