After testing various small Solar Panels for the Boron LTE in this post, I decided to figure out how to operate a Low Powered Boron while we are awaiting Sleep Modes for Gen3. (Special Thanks to @Rwb for your help!)
The answer is the EN (Enable Pin), which works for all Gen3 Mesh Devices.

Boron LTE Power Consumption:
I wrote code for a Photon that uses a 16-Bit ADS1115 and the µCurrent GOLD to measure the Power consumption of the Boron when powered via it’s Li-Po Connector. It averages 100+ differential 16-bit readings each second to calculate average current, totals the power over time, and prints a results line to serial every second.

A sample result for a 4.10V powered Boron LTE on the Li-Po connector includes: Startup, Cloud Connection, Publish, plus 1 sec before Shutdown is :

The Boron LTE’s average current when the EN pin is pulled LOW is 76 µA (Argon & Xenon are half that).

It’s easy to see that a tiny 0.5-watt Solar Panel & Li-Po can meet the power requirements for a Boron LTE that’s shutdown via an external Timer, on a reasonable schedule. I don’t expect any surprises for Trial #1 listed above. The enclosure is roughly 4"x2".

Trial #2’s Boron is operating on 3xAA batteries (Energizer L91) via the Li-Po connector and the same external timer to Shutdown via EN Pin between Publishes. The L91’s provide 4.5 watt-hours @ 100 mA load. Quick math says the 3xAA Boron should be capable of 4,000+ publishes. In my testing, Successive Cloud Connections have not taken any longer on the Boron LTE than it does after being without power for 12 hours.

Trial #2 is publishing every minute to speed up the 3xAA test. It’s Awake time is averaging 12 seconds before it shut’s itself down after the publish. It publishes the 3xAA battery voltage, the processor time for each wake cycle, and the total number of publishes since the trial began. The # of publishes are read/stored to EEPROM each cycle. I should know in a few days how close the 4,000 publish estimate is to reality. I’m using a 6xAA battery enclosure for the 3xAA batteries and Boron.

This is the external timer I’m using to Ground the EN Pin for Gen3 Shutdown: 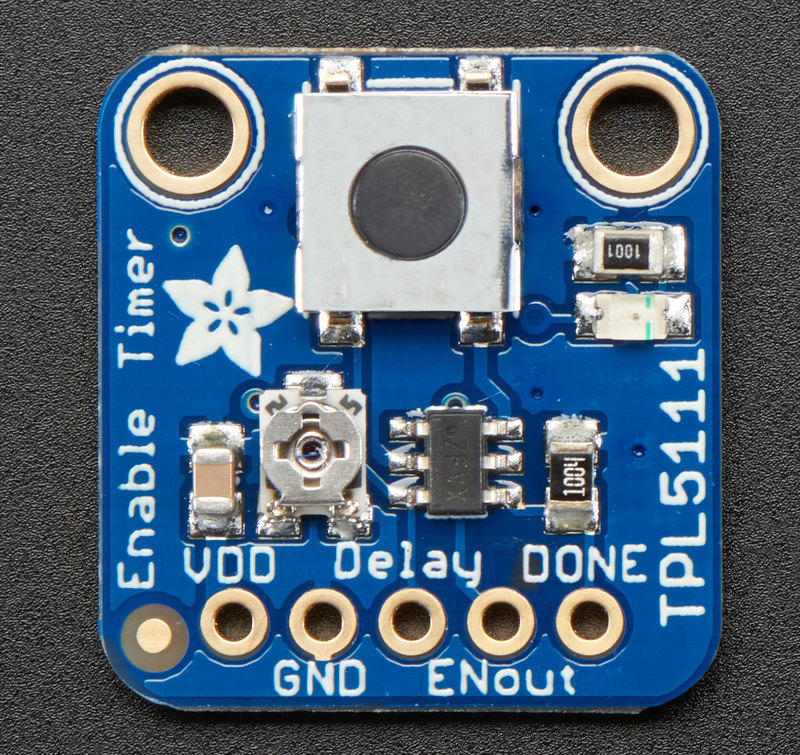 The Adafruit TPL5111 Reset Enable Timer is a stand-alone breakout that will turn any electronics into low-power electronics! It will take care of enabling & disabling your electronics using a built in timer that can vary from once-every 100ms up...

It’s a great option for Gen3 projects that can operate on a schedule.

Trial #1 (Boron LTE, 0.5-watt Solar Panel, 2,000 mAH Li-Po, external Timer for EN Pin) required a modification to the Code during the experiment. Originally, the PMIC would not resume recharging the Li-Po if the input (solar) voltage dropped out completely. This means that charging would not resume after severe cloudy conditions, or night time. My solution was to add pmic.enableBuck(); inside the Setup() routine which runs each time the Boron Starts-up from the external Timer. The following PMIC settings were eventually used:

I’m guessing that pmic.enableDPDM(); & pmic.enableCharging(); could be removed, but I haven’t confirmed that.

Once pmic.enableBuck(); was added, the daily Battery Profile became pretty boring, with no major unexpected results. The 0.5-watt Solar Panel can easily recharge the Li-Po when running a 5 minute Wake/Publish schedule. The Boron doesn’t terminate the Li-Po charge at 4.2V (SoC 100%) anymore, as with my previous tests using pmic.setChargeVoltage(4208). This isn’t necessarily a negative result, and I’m sure there is a explanation.
A typical 24 hour Graph looks like this:

As you can see the below, the Battery Voltage has started a steep decline indicating the end-of-life is approaching soon. The Boron performed 9,869 Publishes with the 3xAA Batteries in Series.

[Edit: Test Complete, final 12 hours shown below, 4.20V would be the Battery Alarm Threshold for 3xAA]

The average MCU time for Startup/Cloud Connection/Publish was 12 seconds. This does not include the 2 Seconds of “wait-after-publish” before Shutdown.

Any comments, suggestions, or questions are welcomed.

Can you help me with a similar question?

My problem is a bit different than yours. I need the mesh device to recycle power to “itself”. I have looked at the TPL5110/1, but these two devices are designed to recycle power every (maximum) duration of two hours.

Is there a similar device that can extend this to 24 hours? I realize one can always use an external timer/relay like this: 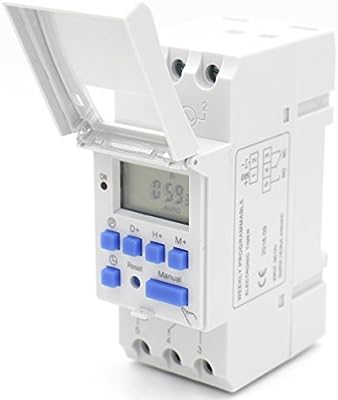 but was hoping to miniaturize the circuit …

Thanks in advance for your input.

@Jimmie, there are folks on here a lot more qualified to answer that than I am.
You might solder your own resistor to the TPL to increase the cycle time above 2 hours, instead of the POT. Nope: 7,200 seconds is the Max according to TI’s datasheet also.

Or use any low-powered MCU (ATTiny) instead of the TPL to create your own.
I believe there is a programmable version of the classic 555 timer also.
Or you can wait for the Sleep modes to become available, but at a higher Quiescent current I presume.

You are right, the maximum is 2 hours.

I was hoping the TPL would do it as I have a board for it. BTW, I am not worried about power consumption because the system had to work 24/7. I need the timer because I want to recycle power to the Boron. System.reset does not solve the problem because the radio apparently is not reset.

@Jimmie, You could use a Pin to drive the EN Pin low for a Shutdown.
This will cause a Restart of the Boron:

I’d expect the standard answer would be to eventually find yourself some form of external watchdog.

Thank you @Rftop, definitely worth checking out especially since the need to recycle power in my case in not related to a hangup issue, hence no need for a watchdog.

BTW, what size resistor do you recommend?

BTW, what size resistor do you recommend?

IDK, do you have any idea what size the internal Pull-up used for the EN Pin is ?
The code above works without using a current limiting resistor. I’m just guessing that it would be a good idea.
Hopefully someone else can chime in and confirm.

I would like to recreate your tests with my own boron /TPL5111 setup to better understand my power consumption and properly size my battery packs.

Would you mind posting your full boron code for trial #1 and #2.

I have several versions of Code for Trial #1 (Solar) where I made adjustments.
I’m not sure which one was the “Final”. I need to look at those closely.
As you know, sleep modes are available now which makes Trial #1 almost obsolete.
Sub-mA Sleep currents on the first firmware update means we’re better off using Sleep when Solar is an option IMHO.
However the PMIC adjustments and temperature monitoring for Li-Po charging are still valid with Sleep Modes + Solar.

Trial #2 was a cold start every minute. Be aware that the Cellular Data Reporting wasn’t working in the Particle Console for several weeks around the time of this test. So I have no idea how much Data this actually used with the cold starts every minute. The SIM data usage spontaneously ramped-up after the trial was over and the Boron had moved on to other duties.

Please Note: Boron LTE’s stopped working on My local Cell Tower about 2.5 months after Trial #2.
I don’t know if these are related.

I’m glad we have the results for 3xAA without waiting a year for the batteries to deplete, but I don’t see any need for someone to repeat it with such an aggressive 1-minute interval ( no idea if that was your plan, just sharing my thoughts ) .

@Backpacker87 reported ~ 5MB/month for a Boron waking every 5 minutes using the EN pin & external timer.
It appears NOT connecting the the Particle Cloud helped significantly with data usage, per the thread below.

RESULTS - Cellular Usage over Month Conditions: 5 Borons operating within a few hundred feet of each other SEMI_AUTOMATIC with no connection to cloud TPL5110 timer used to wake up every 5mins and send two float variables to Ubidots then power down. The usage from Feb. 4th through Mar. 4th. was as follows: Boron 1 = 4.64 MB Boron 2 = 5.10 MB Boron 3 = 4.77 MB Boron 4 = 4.83 MB Boron 5 = 5.16 MB I am very pleased with this usage, and this is manageable for me. I believe that the use of …

This is good news, as I wasn’t able to measure Data usage for Trial #2 during my battery tests last year when the Console had hiccups with Boron Cellular Data reporting.

Since the Data usage question seems to be answered now, here’s some more examples for a project that requires primary batteries:

A power budget for my location would be calculated using any publish schedule (1 mWh each publish) and the Quiescent current of 7.5 mWh per day.

The L91 is rated at 4,500 mWh for a 100 mA constant load (for the time spent connecting & publishing).
From looking at various discharge profiles, it’s safe to assume in excess of 5,500 mWh for the 76 µA shutdown current (just as a point of reference).

If you left the Boron LTE in standby mode, and never pulled the EN Pin high except for an Alarm/Emergency Condition, 3xAA batteries would last 2 years waiting until it’s needed (7.5 mWh per day to reach 5,500 mWh rating for shutdown current).

But most of us will want to send data at some scheduled interval for most projects.
For a 2-hour Schedule over 1 Year:

For 3xAA only @ 1 hour Shedule:
Works out to be ~ 5 months before the 3xAA L91 batteries need replacing.

4.20V would be the Battery Alarm Threshold for 3xAA, to start sending a notification that 3 new batteries are required.

Note: The 1 mWh per Startup/Publish Event will likely be reduced if not Connecting to the Particle Cloud each cycle, by pushing data directly to your backend service (as @Backpacker87 did with Ubidots to minimize Cellular Data on each Event).

A comparison to the initial Sleep Mode in 0.9.0:
System.Sleep uses 700 - 800 µA Sleeping Current, or 10x that of Shutdown via the EN Pin.
But System.Sleep will continue to improve.

IMHO, for Projects with Solar or other recharging methods, Sleep Mode is the clear winner.
For power sensitive battery projects, the external timer wins.

Love this work you guys are reporting on using the LTE Boron in low power mode with the TPL5111 external timer.

I have a quick Newbie Question on using / powering the TPL5111.

My understanding is the when you pull the EN pin low it turns off 3V3 on the Boron.

So I assume you powering the TPL5111 (VDD) directly off your battery (LI+) pin?

Any concern about hitting the EN pin on the Boron with with 4.2 volts from the DRV Pin on the TPL5111 on wake.

Thanks for any input on wiring the TPL5111 on the Boron.

Again, thanks for your nice work this topic - super useful.

Any concern about hitting the EN pin on the Boron with with 4.2 volts from the DRV Pin on the TPL5111 on wake.

@micromet, The TPL5111 doesn’t Power the Boron.
It only pulls/holds the EN Pin to Ground during a Shutdown.

I never checked, but I assume that the TPL5111 wont influence the EN pin state during normal operations, and the EN pin would remain ~3.8v from the Boron’s Pullup.

You may be thinking about The TPL5110, which is a different animal.

Thanks @Rftop for sharing your example.

Quick question, when the TPL chip pulls EN low to disable the Boron, where does the program resume when the EN returns High via the timer? Doe the program pick up where it left off in the main loop ? or does it reset and run the setup again?

The device would start fresh at startup. No variables will be retained unless using retained or eeprom.

This might be obvious, but can the Boron even charge while the EN pin is low? I would imagine that this disables power to the PMIC too…