Californians have long been told to prepare for earthquakes. Now they realize the poor air quality could be another issue that puts their health at risk. California has eight out of the ten most polluted cities in the U.S., according to air sensor data presented in the American Lung Association‘s 2018 annual report.

Inspired by church bells, artist Rosten Woo created the Mutual Air project to give the presence of air quality and climate change in everyday lives. Working with a team of local science museums and government groups, the Exploratorium deployed 30 sound installations with IoT air sensors powered by Particle to “chime in” the fluctuations in local air quality across Oakland, California, since Sept 30, 2018.

The sound installation has two parts. The chime will ring when it detects particular matter (PM2.5), and the woodblock responds to the global average of CO2 in the earth’s atmosphere. Faster chimes and rhythms indicate a larger amount of particulate matter and carbon dioxide in the air.

Each sound installation contains a Planteuer 2500 particulate matter sensor and a Particle microcontroller that connects wirelessly or cellularly to data streams provided by the National Oceanic and Atmospheric Administration (NOAA).

The Exploratorium is known for engaging viewers to learn about the world by providing inquiry-based direct experiences with phenomena. The Mutual Air project enables viewers to “listen” to the air and encourages individuals or groups to get involved by hosting a sound installation on their property as a “bell steward.” It tries to call attention to the air quality and build a sense of personal connection of climate change.

Woo has been an Exploratorium Artist-in-Residence, delivering creative works that reflect environmental initiatives. He was initially brought on the Wired Pier project, which measures and records conditions in the environment, including the weather, water, pollution, and more, around the Exploratorium campus at Piers 15 and 17. Woo was interested in how the data came to be, so Exploratorium launched him on Common Sensing video project, where he got to explore and understand who collects the data for climate modeling, how they do it and why. After several experiments in environmental projects, Woo proposed Mutual Air.

The project required in-depth collaboration between an artist and an engineer. Ray Gruenig, the Senior Exhibit Designer at Exploratorium, offered essential engineering support, building the engineering design of the sculptures and integrating hardware, software, and connectivity on Particle platform to express the concept. “Artists dream and engineers build,” said Gruenig, “So finding something that fits the dream, the budget and timeline is always an interesting process.” 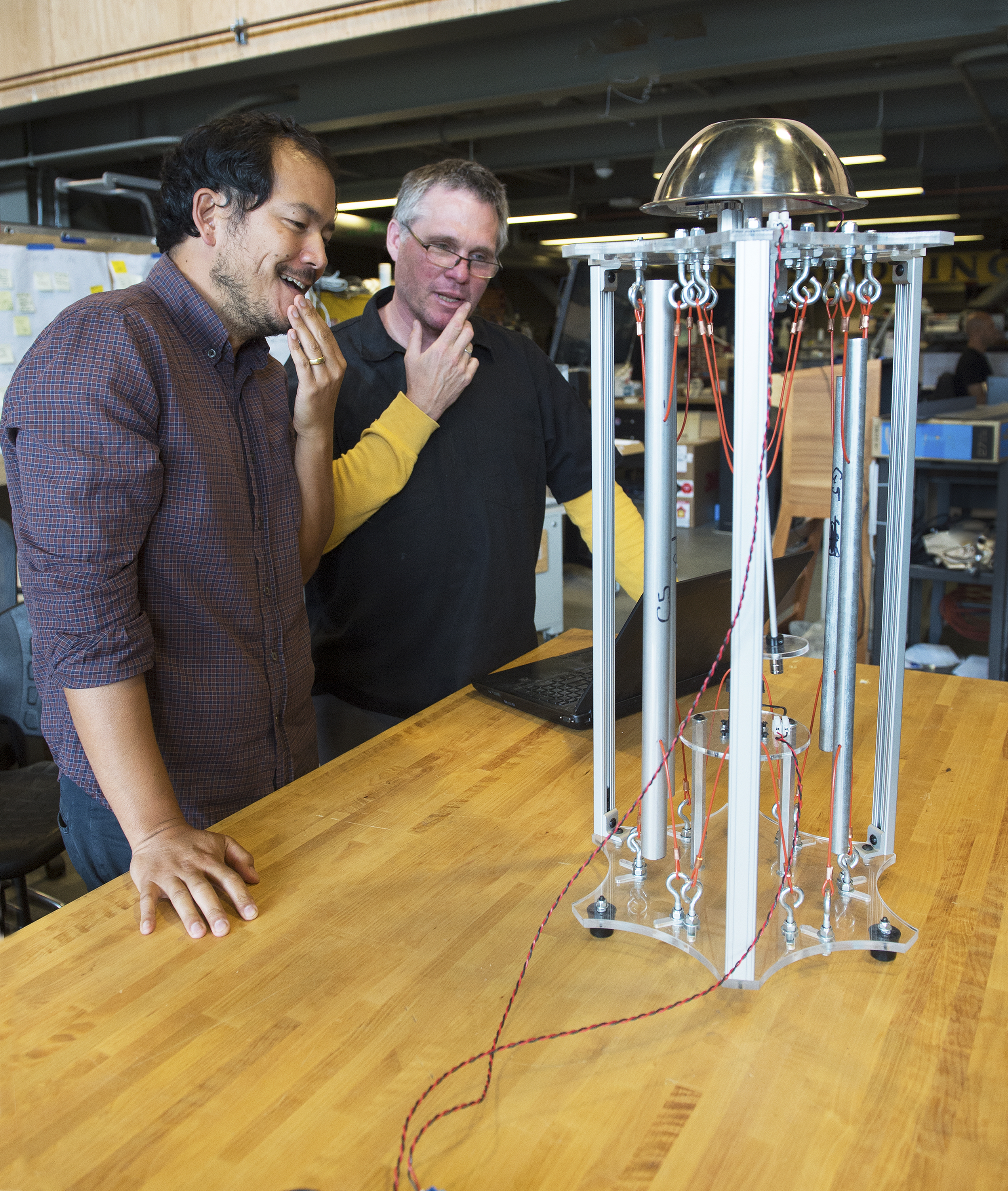 The recruitment process was also complicated. “First, the installations need to be in a space that people will encounter them easily. Second, we must get permissions from whoever might have concerns about noise pollution and liability. Third, we need to evaluate if the placement is reversible after the ‘bells’ being securely installed.” said Kirstin Bach, the Program Manager at Exploratorium.

Installing wasn’t the a breeze

The actual installation process was time-consuming. Due to its complexity, the team needed to assess the proposed site beforehand. They also needed to revisit at least once to finalize installation details and do the actual installation. “It’s not like a home project where you can just send somebody a kit and have them register and install it themselves,” said Gruenig, “We usually have to do it ourselves, so it’s a lot of work and hours for each one from recruiting through installation.”

The project initially focused on a geographical area of West Oakland due to its concentration of air pollution caused by industrial manufacture and transportation, but Exploratorium expanded the network as they learned about landing sites and community partners who can host the bells. 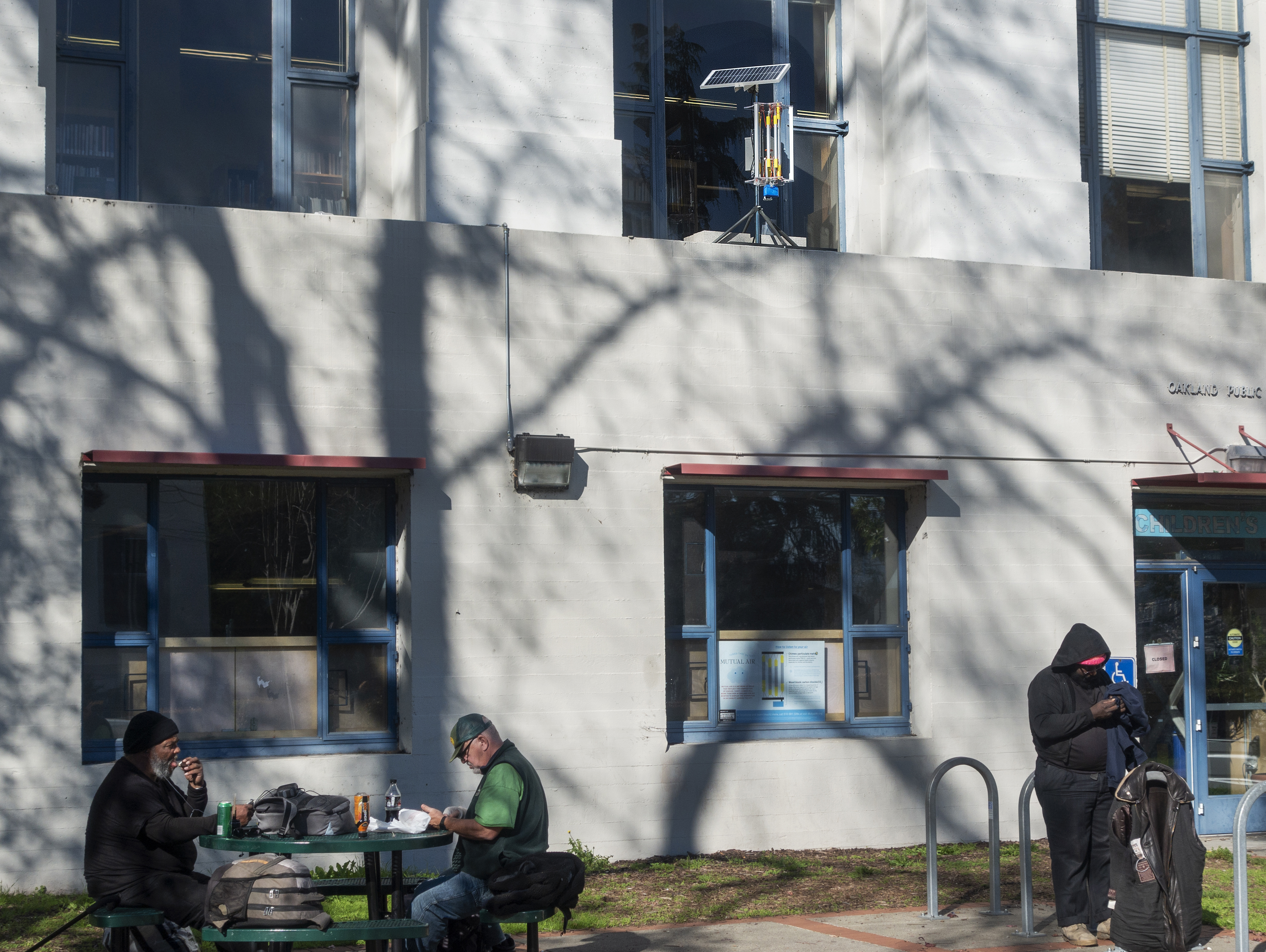 “The problem we were trying to solve with Particle is the connectivity,” said Gruenig. He used Photons preferentially if the location has Wi-Fi. “We use Photons whenever we can because it is affordable, more reliable and less latency, but when we can’t use Wi-Fi, we will switch to Electrons. Using both is a way of opening up more possible locations.”

The difficulty of deploying the project paid off in the end.

“We are definitely out on new territory, the community partnership, the technology, and the whole concept, etc. The fact that we are certainly not just repeating is exciting for everyone,” said Gruenig.

The project also resonated with citizens significantly during the period when California was experiencing several air quality issues caused by the wildfires. “The ‘bells’ captured everybody’s imagination, seeing the poor air quality and relating it to the constantly ringing bells, “ said Bach, “There is nothing we anticipated nor really wanted to happen, but the project works to make people aware that the air isn’t just some static thing that’s always the same.”

The Exploratorium is still looking for locations that are near schools, parks, and busy streets or places that people gather. They are looking for hosts who are enthusiastic and want to know more about their air. Those interested in this opportunity can visit and sign up for the project via MutualAir.org.

Editor’s Note: Mutual Air was made possible through the help of the Oakland Museum of California, the Chabot Space and Science Center, the City of Oakland Public Art Program and Cultural Affairs Division, the West Oakland Environmental Indicators Project, and with IoT platform support from Particle. Additional support is also made possible by the generosity of the Kenneth Rainin Foundation’s Open Spaces Program.