Is this project feasible with the photon?

Hi, thanks for reading, I’m new to the photon and hopeful one of you experts can say yay or nay to this project.

Basically will the photon be an adequate driver of LEDs over I2C with a mcp23017?

I have a word clock that I’ve already done in Python/rasp pi/mcp23017 with probably 50 LEDs and maybe 10-12 on at one time. I want to do this project again and am hopeful the photon could replace the Pi.

I’ve read some complaints about the photon and the mcp23017. That so far is my only concern. The power consumption of 10-12 small LEDs seems ok for the photon. And I’m fine porting from Python to C.

Reference : https://github.com/khibma/WordClock
Having something with built in wifi allows me to keep track of actual time, instead of a hackey loop and button presses to increment time, thus why the photon seems to appealing. 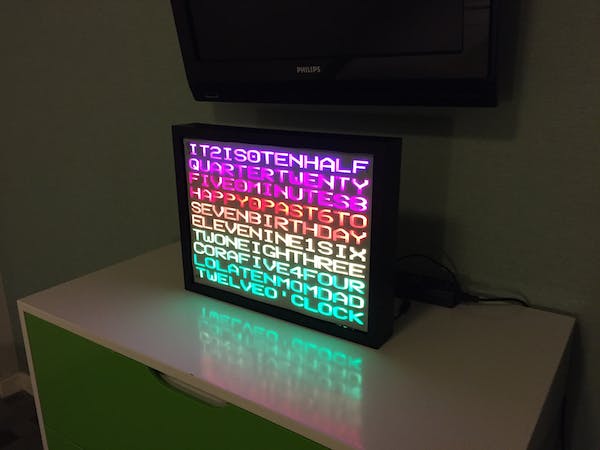 I’d say probably yes. The Photon supports I2C and ought to be fine. One caveat: the regulated 3.3V output (3V3) only sources 100 mA, so that probably is not sufficient for driving many LEDs and their associated circuitry. However, you can use an external power supply. Or, if you’re powering by USB, the VIN pin can be used as an output and can source 1A at around 4.8 VDC. Even though the IO on the Photon is 3.3V, digital inputs are 5V tolerant, including I2C.

Thanks. I’m still trying to get my head around the different voltages compared to the pi. The LEDs I primarily use are 25mv, but I could Work with 20mv. I’d power with an external wall adaptor…so it’s just a question if I’d be pushing to much across…which might be the case when I hit certain combinations requiring 12 LEDs to be on. Hmmmm

Any specific reason you prefer to use ‘normal’ LEDs? Neopixels and RGB matrices can create some really awesome effects. They’re also much easier to make.
Shameless plug: https://www.hackster.io/moors7/death-star-word-clock-44ff10?ref=challenge&ref_id=22&offset=1
(I use a matrix, @wgbartley neopixels)

That’s a real nice project. Any “good” reason? Not really…mostly cost and my assumptions that the matrix is much more than I’ve needed. Yes it does look like it’d give a lot of flexibility. I guess the other big reason is the matrix sort of dictates how you need to space your letters. My first one was 23" X 18", so each letter I have is over 1"…
Besides, I like soldering resistors to LEDS