Trouble with interrupts on Argon

Hi, I’m new to the Argon. It’s my second MC I’ve worked with and the first one outside of a class.

I’m having trouble getting interrupts to work on my argon. I keep getting the red “sos” error led (firmware crash) and I can’t figure it out. I’ve checked the forums, YouTube, and read through the Reference Guide.

I have the inputPin plugged`` into a point in a circuit that goes from 0 to 2.7 volts when I push a button.

And here are some of the sources I’ve been using.
https://docs.particle.io/reference/device-os/firmware/#interrupts 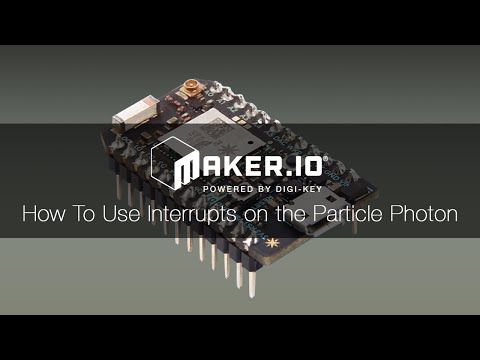 Any help is appreciated.

I think the code in the interrupt was too long. I had originally had a publish to the cloud and that had the same effect. I SWITCHED IT TO CHANGING A VARIABLE AND IT WORKED!!!

Sorry for all caps but it’s midnight here and I literally jumped out of bed to try my code.

That’s definitely the issue.
delay() is an absolute no-go in an ISR.

Also a very heavy function call like Particle.publish() should be avoided at any cost.

BTW, you should only reset the flag when it actually was dealt with.
The way you do it there would miss a second trigger if it happened to occur during blink_boardLED().

I’d rather put it this way

Another alternative to your flag approach with a blocking blink function would be to use a Software Timer to do the blinking.

I left out the 1 second delay after switching off the LED as it also doesn’t actively do anything other than slowing down your over all code flow.
With this approach, if the interrupt fires again while the LED is on the timer will be reset to start counting again and the LED will stay on for till that “new” second expires.

Another thing to note is that you need to make sure your switches and buttons won’t let the attached GPIO pins float when not pressed. The simplest way to do that would be via INPUT_PULLUP or INPUT_PULLDOWN instead of merely using INPUT.

After my little epiphany last night I worked until about 3am. I did change it to reset the flag after the interrupt is dealt with as you said.

I’ve added Software Timers to my list of things to learn. I’ve modified the blink function to make it multi-use but I’ve got to learn I2C for a sensor so I’m focusing my efforts there.

I’m including my current code. I’ve commented out parts to reduce ram usage and I’m about to save a copy then remove those parts entirely.

Also forgot to address the pull up/down resistors part. I thought those might be a problem while I was trouble shooting but I have the digital I/O connected to branches that are high or low (connected to Vs or gnd) but change when the button is pressed (circuit 1: button, led, transistor switch) or the circuit is completed (water sensor made with a transistor).