After playing a bit with RGB.control/.color I’d like to suggest one unimportant - but just as easy to do - slight HW tweak in future production runs or at least in future HW revisions.
Since the green LED in the RGB is so overwhelmingly bright it could do with a slightly stronger resistor - and while being at it the resistor values for all three colors could be adjusted to actually produce white when having all color components set to 255 (100% pulse ratio).
Sure there will be some tolerance in the LEDs and the LEDs won’t produce linear brightness results when not dimmed, but to some extent you’d get better color results.

I’m aware that the RGB-LED was not intended as a lighting device but rather as a feedback indicator to have some easy means to let the user know, what’s going on inside the box and thus it would make no difference if the colors are off a bit, but since we now have control over it, this slight change to three tiny HW components might be going without much ado.

Great idea @ScruffR. I think you’ll see that it may be easier to do in software though:

Core is so tiny and jammed with hardware, that the 4 resistors needed for the 4 LEDs are all in one resistor network: 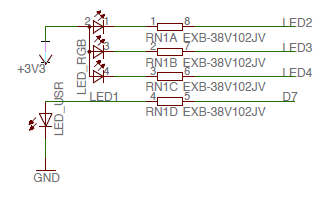 To break out just one resistor could be possible, but not super easy to find a place for it on the PCB. Maybe though!

It would be a lot easier just to scale the PWM for the green channel ever so slightly.

Someone with some color / hue sensing optical equipment might be needed to really know where to set it.

Until then it’s easy enough to play with in your code:

Thanks @BDub for that HW info. I must admit, I didn’t study the layout. I just supposed that the three resistors placed around the RGB were the ones that would need to be adjusted (2x 22Ohm might have fit the bill for G & B assuming 3.2V drop, but then 10k for R did not

I should have checked specs beforehand.

That can’t be the right calculation because these LEDs can take up to 50mA for each color.

This graph doesn’t really support an IF of 20mA and forward voltage of 1.8 or 3.0 though:

The datasheet is a little unclear if the current rating is per LED, or for the sum of all 3 LEDs. I assume its for each LED individually… Also the 50mA is a peak pulse rating, ie 50mA but not for longer than 100usec every millisecond (10% duty). Its rated for 20mA continuous.

I too was extremely impressed with how bright this LED was for so little current. So much so that I measured the resistor network just to be sure it was really 1K… which it is.

Here’s an IV curve for an LED, notice the current doesn’t take off until the minimum Vf is reached. This is also the point at which LED’s start to emit light.
http://upload.wikimedia.org/wikipedia/commons/a/a5/Diode-IV-Curve.svg

Other diodes are different, but similar:
https://www.google.com/search?q=diode+iv+diagram

This is why the proper calculation for LED current is:
( Vtotal - Vf(min) ) / Rlimit = Imax

where Rlimit is your current limiting resistor and I(f) is your LED max current spec.

If your resistor is too large, the first equation will not saturate your p-n junction and the Vf will be somewhere along the curve. That said, the current won’t be at (Vtotal / Rlimit). The current will still be ( Vtotal - Vf(bias) ) / Rlimit = I for whatever Vf the LED is biasing at along that VI curve.

Hm, fair enough. I never paid attention to the voltage equation for LED circuits in the past, assuming it had a limited effect on the brightness.

I think we can agree on that!

@zach, @zachary, …: I agree with what @BDub mentioned in an earlier post here, that it would be quite surprising to get this kind of brightness out of less than 0.3mA (given 1kOhm & 3.0V drop @ diode) - on the RGB LED.
Unless we both missed something when looking at the layout.

Maybe one of the HW gurus could shed a

of light on this for us

The only explanation I can offer is that most RGB LEDs have a less transparent covering, which helps to mix the colors. I’m not totally in love with this LED because it doesn’t mix colors that well, but in doing so I think it’s brighter than other LEDs because the coating lets more of the light through. That’s just a guess though - your math on the current seems correct to me.