Po-util: The Ultimate Local Particle Experience for Linux and macOS

It’s latest update. I did. I’m not sure If I pricked redbear.

You are on macOS. po-util will be installed via Homebrew
Homebrew is installed.
Installing po-util with "brew"
Warning: nrobinson2000/po/po 91.0 is already installed

It looks like you have multiple versions of po-util installed.

What do type po and which po say?

Here’s what happened? I removed redbear duo to see if po util works. 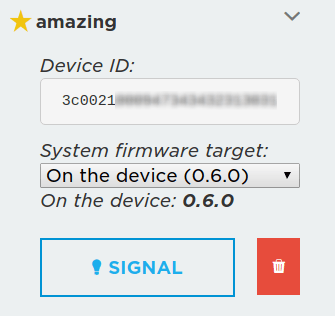 Next I copied this to make new redbear duo.

I’ve tried almost everything. is there something I’m missing?

how do I delete the non macOS version?

What do type po and which po say? It should help you locate the linux version if it is installed.

Can you delete ~/po-util.sh and remove the alias in your .bashrc?

Update:
I fixed the problem linux was having with building for duo.

Could you make something cool for Po-Util?

100% complete show up done. You may unplug USB. Unplug show screensaver or kitchen dashboard(weather, clock). If user plug in Arduino Uno or Adafruit. It should show. Sorry, not compatible.

Could you explain what you are looking for po-util to do more clearly? I understand that you would like a progress bar but I’m not sure what else.

When using po duo flash, po dfu-open is used to put the device into dfu mode for you.

###Introducing the bash completion beta!
You can now press tab (twice) while typing any po-util argument to have it automatically completed. Please contact me if I forgot any completions, as this is a beta.

Please update po-util and reinstall to get the bash completion.

The bash completion is now stable!

I’ve ironed out some bugs I was having with the bash completion on macOS.

I’ve also added CONTRIBUTING.md and a Code of Conduct to po-util.

I’d also like to announce that I am offering my bash skills to anyone on the community who needs them.

I’ve made a bunch of updates to po-util. Please run:

Added 3 libs with new feature: Now I have …

But when I do po photon build, I get

Any suggestions on how to get the blynk library to build?

And then use the blynk library optimized for po-util:

I have found a method for Linux to open devices on the default baud rate of 14400 to put them into DFU mode. No more 19200 baud workaround!

Also, po-util now installs all of its dependencies and components in ~/.po-util to stay more organized. Below are the instructions to remove the old components and update po-util on macOS and Linux:

I had the arduino IDE up and functional.

arduino IDE 1.8.3
I had Teensyduino 1.3.7 working too
I have the Raspberry agent installed on the latest raspbian
these worked today.

I can still compile on the arduino IDE for teensy and other boards but the serial monitor freezes.
I installed po-utils today.

well did some other installs…

I am building ATOM on the rpi3…

I got the serial monitor working at 19200…for now

I did get apm and atom on my rpi3.

after a bit of flipping through

Nice. I haven’t tested po-util on raspberry pi much. Are you able to build projects?