Photointerruptor for fermenter not tallying and publishing

Hello and Thanks in advance!

I am constructing a bubble counter to monitor fermentation rate in home brew. It will eventually use a photointerruptor in a configuration like this: 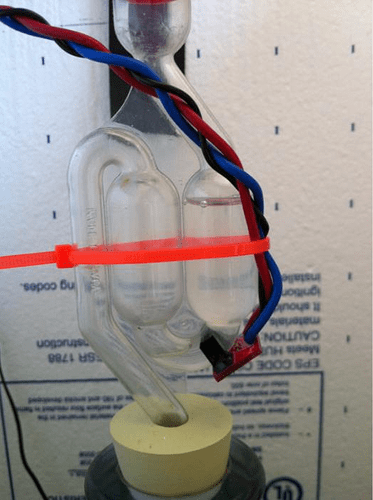 Pasted image523×700 338 KB
It will be filled with an opaque liquid and any time a bubble passes, the sensor will go from LOW to HIGH. The goal is to have this tallied, averaged, and Particle.published every ~5 minutes. That will then go to a Google Sheet via IFTTT for tracking.

Currently my fiddling setup looks like this (data to D3): 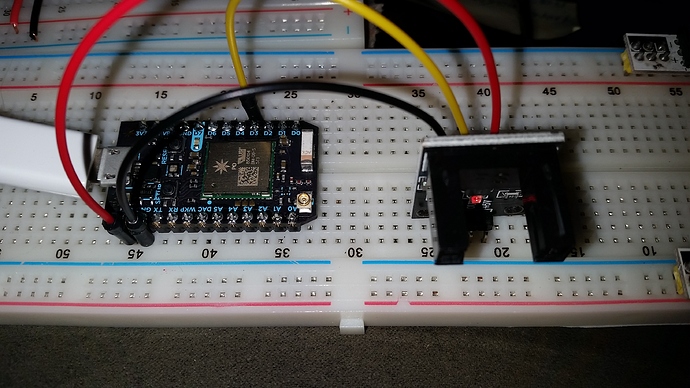 I am currently just trying to get this to keep count of how many times the sensor is “open” (I always start the program with it blocked) and am having a devil of a time. At this point I just want it to 1) turn the D7 led on when the gate is unobstructed, 2) use “bubbletally” to count the number of times that happens, and 3) publish that number to the dashboard. I will worry about the math of averaging it later.

Here is the code:
//Title: Turns LED on and Publishes when interupter is clear.
//Photogate reads “HIGH” when obstructed.

Currently it runs and the LED turns on sporadically when the gate opens. This is what publishes to Dashboard:

Null_clip.JPG1233×129 11.1 KB
I’m very new to C++ code so…sorry. I have reviewed these threads and was not able to glean anything that I understood or worked for my project. I have also reviewed the Docs section on Build and did not get there.

I’m a pretty avid homebrewer. One way to estimate the rate of fermentation is to look at how often a bubble is produced. Some folks have done this using a photosensor. I put together a simple bubble counter using some 3-core cable and a couple of resistors. The video shows it in action. The beer is bubbling 2-3 bubbles in succession every 8 seconds or so. (If you have sound, you can see+hear the bubbles in time with the sparks response and the log.) Now to just hook this up to the fermentatio…

Hello there, I am about to start my first true photon project and need a little direction. I know very little about coding but this is a side project to help myself learn some things and create a device that I could put to use. I plan to use a photointerupter+photon to count bubble passing through a tube. I need to write (or find/copy) code that will allow me to obtain bubbles/hour or bubble/min (figured if I did bubbles/hour x 21 days, that would be about 504 data points which would work). …

Any help is greatly appreciated. Will deliver home brew to 21+ individuals in contiguous 48!

Are you sure your circuit is correct? It is hard to see what is on the little board for the sensor but there needs to a resistor for the LED side of photo interrupter and typically three wires for the output side (+V, data, and GND). If the sensor is made to do this for you, that is great, but we can’t tell from the picture.

Can you connect a simple LED and resistor or a voltmeter to the sensor output and see if the LED lights up or voltage changes when you block the beam with your finger?

You might need a pull-up resistor on the output.

Thanks for the snappy reply. There is an LED on the sensor module that is lit up when it is unobstructed. The LED turns off when I put my finer in the way. I think this is the same module (http://goo.gl/g1FU5y).

Do I need another resistor somewhere?

I was doing some further poking around and saw someone put “String(XXXXX)” in their Particle.publish command and I tried that:

…and that has worked. I just need to set it to run for ~5 minutes and then divide the bubble tally for a rate.

If you are still interested I would love to know why this worked. I have read a bit about strings, but was totally confused.

Sorry! I should have read your code first. Yes, Particle.publish takes two Strings or char arrays and sends a “message” out on to the cloud. Publish is a “push” technology. A String is an object (check the Arduino doc for details) that has various nice methods that can help you handle character type data. A char array is the older C-style string that is just an array of bytes in memory that get interpreted as text strings. Both work.

But your original code was just trying to use an integer where publish expected a String or char array, so the code did not know how to interpret that integer into human readable text. When you call String(bubbletally) you are creating a new String object whose character contents are the value of the integer. So if bubbletally has the integer value 1234, String() of that becomes an object that contains “1234” stored as ASCII characters in memory.

You may want to use sprint() or even better snprintf() to print your variables into a char array. Here is a tutorial on a web-friendly way to do that:

Let's say you have looked at the Getting Started with Spark.publish() tutorial, but you need to send data that needs more processing once it gets to its destination on the web. You have a lot of choices for the data format, but one simple choice is...

You could also use the “pull” which would be Particle.variable. Here you would declare bubbletally as a cloud variable in setup and then something on the internet could “pull” the value whenever it needed it.

It might be no issue for your use case, but the way you’ve written the loop() code might miss some bubbles if they’re coming quicker than one per second (or you’ve got cloud connection troubles).

This way the LED will toggle each time a bubble passes.
And if you feel adventerous, you could use an interrupt for the counting

BTW, try to move the Photon to the edge of the breadboard to avoid strain on the USB connector. Your USB cable looks painfully wedged in there.

Thank you both for your time and wisdom.

@bko , that is concise way to describing String objects and makes things a bit clearer. As for sprint() or nspintf(), that is a bit above my current pay grade but I will keep them on my reading list as my skills progress. I am familiar with Particle.variables (barely), but for my current purpose I think Particle.publish will fit the bill.

@ScruffR, I knew my timing would need some tweaking in order to count optimally…thank you for doing the work! I ran yours and it worked considerably better than my own. I even moved the blocking object out and back repeatedly as quickly as I could and it still kept count! The peculiar shape of the USB is due to a different device (I would never drop a Photon) that got dropped while charging. That is just the shape it stays in now. Normally I hang the USB port off the edge of the breadboard.

Anyone, Since the device is now counting flawlessly (Thanks @ScruffR) I now need the counting loop to run for 1 minute (to start with), then publish the results, and repeat. I have tried a " While(millis() < 60000) {" before the counting loop but it ran a single time (incorrectly) and quit. I want the simplest method possible so that my noob skills can tweak it later. It seems like the While() statement could work. Or I could use an Interrupt() as @ScruffR recommended, but I have no clue how those work. Or, I think, a timer() could work. I also don’t know those at all.

Which do you gents think is the simplest direction to head?

Thanks again for all of your help!

I now need the counting loop to run for 1 minute (to start with), then publish the results, and repeat.

That is an easy alteration to my code above.
If I understand you correctly, you want to reset the counter each minute aswell, yes?

That should be it.

@ScruffR, that worked flawlessly! You have saved me hours. My next batch of homebrew will be in your honor. I will post when I get the sensor mounted and working so you guys can see the progress. I’ll probably put the whole setup in the Project Share too.

. A char array is the older C-style string that is just an array of bytes in memory that get interpreted as text strings. Both work.

Ha! That implies that older may not be better!

@bko do you feel that String class on Particle is stable compared to the pre-Cambrian C string?

I wonder if my experiences are similar to others here in Particleland.

I always use C-style char arrays in my Particle programs. It is possible to use String() in memory friendly way, but you have to be extremely diligent. This is also true on Arduino.