Get the Scoop on the Latest #PartiBadge and THAT Conference

A few weeks ago the Particle team headed to THAT Conference in Wisconsin, the first of many developer events we plan to attend in the future. As an event sponsor, we led a half-day workshop, brought along some awesome swag, and held a #PartiBadge-powered scavenger hunt during the three-day event. Here’s a quick look back at the event and a bit behind the scenes of the scavenger hunt and PartiBadge.

What is THAT Conference?

THAT Conference describes itself as “summer camp for geeks,” a label that fits well with this family-friendly event held at a large indoor waterpark in Wisconsin Dells, WI, each August. Now in its seventh year, THAT Conference has grown to accommodate over 1,250 professionals and close to 500 family members as a part of the event. There are three main tracks to the conference: a traditional, professional track, a family track with kid and family-friendly (often STEM) sessions, and an entire ballroom dedicated to Open Spaces for attendee-driven conversations. 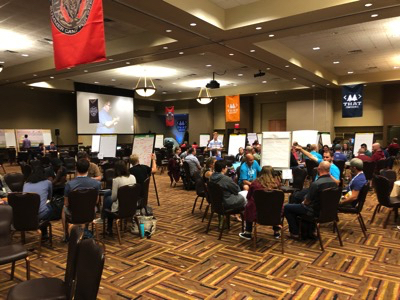 A view of the Open Spaces and hackerspace room, where we camped during THAT Conference.[/caption]

Particle was proud to be a Gold sponsor of THAT Conference 2018, which enabled us to meet and interact with tons of developers from our table in the makerspace corner of the event.

Sunday before the official start of the conference, we held a half-day workshop to introduce folks to Particle hardware, our platform, and tools. Over the course of the workshop, an engaged group of conference goers learned about Particle, claimed their very own Photon, and got to explore the world of IoT development via a Photon-powered Blinky badge. 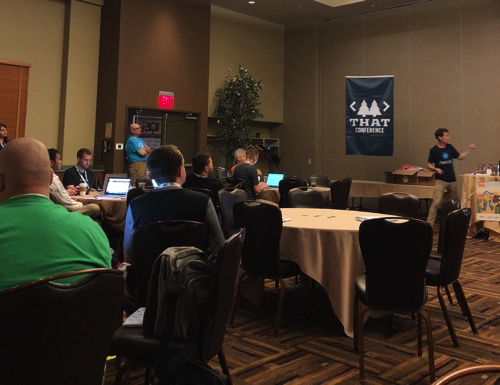 If you’ve been following along since the Bay Area Maker Faire a few months back, you may recall that we created an Electron-based staff badge, dubbed the #PartiBadge. For THAT Conference, we created a new iteration of the #PartiBadge for the Photon, swapped out a few items, and created a hexagon-based PCB design.

For THAT Conference, we produced 100 badges that were assembled by our team in China. We’re pleased with how the badge turned out and are already hard at work on some Mesh-based revisions for the fall and beyond! Keep an eye out for a #PartiBadge at an event near you!

Of course, no event is complete without killer swag, and we brought our best to THAT Conference. In addition to the badge, which folks not in the workshop could earn by completing several challenges, we had custom-designed lapel pins, stickers, and a Particle bandanna. It was fun seeing attendees and families proudly displaying the Spark! [caption id="" align="aligncenter" width="362"] 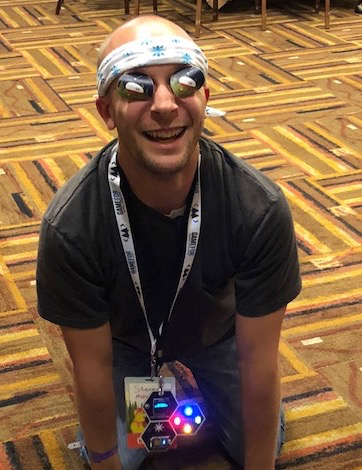 Affixing stickers directly to one's eyes is not recommended.[/caption]

During the conference, #PartiBadge holders could hack their badges to participate in our scavenger hunt. By exploring the badge firmware, and unlocking secret features, contestants could earn points and compete for some awesome prizes. I managed to grab photos with two of our winners. 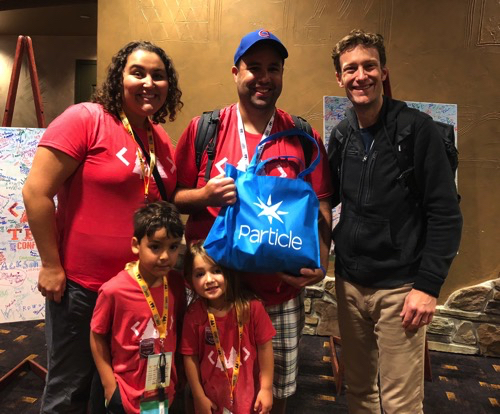 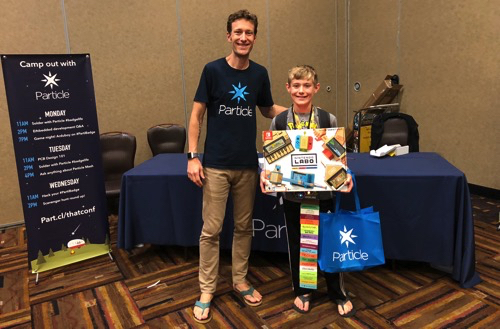 Scavenger hunt prize winner Andrew. He and his dad completed every hunt challenge![/caption]

We’re planning to bring Particle, the #PartiBadge and more to many more events in 2018 and beyond. Is there an event in your neighborhood you’d like us to consider? Let us know in the comments!