Its the 6W panel supplied with their solar kit. It was generating 5 volts indoors not in direct sunlight. I’d guess it is capable of 6+ volts.

Looking at the Voltaic site, their 6w has the following:

Should be fine then.

Yeah, its the nicest panel I’ve ever seen; way over-built, which explains the price tag. 19% efficiency is quite good.

The best solar cells are made by Sunpower and today they are in the 22-23% efficiency range.

Here is one I had made for a specific project. Its a 5v 350mA panel using Sunpower cells.

Sunpower’s site says their top panel is about 21%, but that was 2014.
http://us.sunpower.com/solar-panels-technology/facts/

What did it cost to make that 5v panel?

Yea its 21% efficient after you add in the power loss from connection resistance for the large panels.

The acutal cells are looking to actually be above 23% now:

That’s a great price for what looks like a nice panel. Was that retail?

For setting the charge voltage that should be it, but if this actually will have the effect you are looking for I can’t say.

@ScruffR Ok I tried to add

setChargeVoltage(4208); to the setup code but I get the following error:

So I searched the forum for “Not Declared In this Scope” issues and came across a few suggestions which I tried but they only produced more errors or different compile error messages.

I’m sure I’m missing something really simple but so far no luck.

I have to run for now but if you have any suggestions please do share.

I tried adding the .H file that has this function but that didn’t help. I tried declaring the function above setup but I don’t think I had the format right. Looks like I’m about to learn something new

This function is a method of the PMIC class.
As you yourself posted the respective code snippets, I supposed you’d know how to access such methods.

I have some knowledge of creating and modifying Libraries/classes to for the battery management code you helped with awhile back.

@ScruffR I spent the last 30 mins watching a video that taught about classes / libraries and how they work and I feel like I’m further along now but still no dice.

Based on what I have seen the code below should work but it’s not so I still have more to learn.

I’m I getting closer or am I way off somewhere?

I think you got bitten by a preprocessor issue here.

@ScruffR Your a programming master

With your help I figured it out and successfully changed the charging voltage.

The problem is that still does not charge up past 4v which for me still keeps me at 86.5 % SOC max. See the Ubidots graph below:

One thing that does happen when you up the charging voltage is that the RED charging indicator will flicker like crazy at different patterns once you get close to 4v where the charging stops which is less than desired.

As soon as I set the voltage back to the default 4112v the charging indicator went back to normal.

The chip is able to charge up to 4.44 v based on the spec sheet for the chip so I think a higher voltage than 4208v is possible and may help but I"m going to have to be setup to build locally before I will be able to change the code in the .cpp file for the set charge voltage function.

@RobotChicken since your SOC is only going up to 75% I wonder if the chip has some sort of temp compensation feature for lowering the charge voltage based on the battery temp.

Since your unit it outside it’s possible the higher heat is causing the temp compensation to lower the charging voltage. This is a feature used on many different battery chargers. We would have to look at the spec sheet to find this one out.

I’ll have to look at the fuel gauge settings to see if we can change anything there also. If not then we can always just scale the 0-86% SOC readings to 0-100% and call it a day

Even though I went to 30 minute publish intervals from 15 (15 minute intervals and cell chip on was 14.8KB / hour), leaving the cell chip running instead of turning it off after each publish period effectively cut my data usage in half (4.76KB / hour).

@RWB I don’t think that is the case; there was snow yesterday and still 75%. So I’ve been in the 30 - 60 degree range with no noticeable difference in battery charging, <75%. That anomaly on 2 Mar. is when I plugged it into USB. 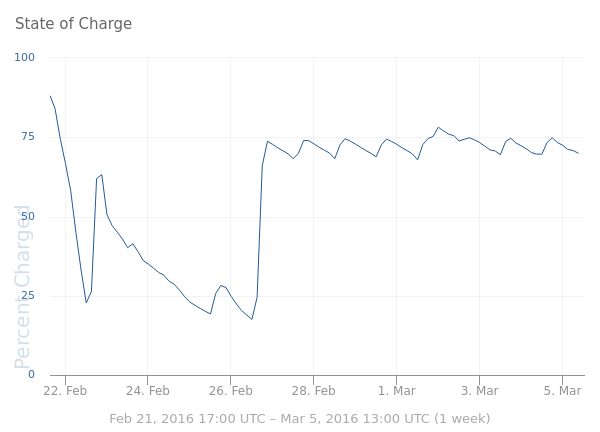 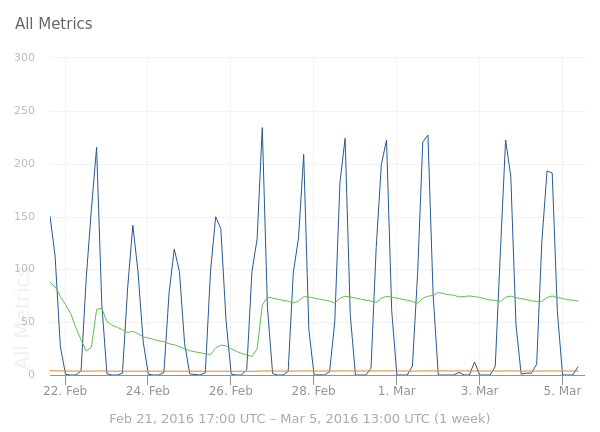 this is one kickass thread.