After a bit of hassle I got the DHT to sort of work with the recommended “PietteTech_DHT/PietteTech_DHT.h” library. It was hanging and breathing green on the acquire and wait function, so I deleted it and the example switch case error reporting statements and I could get the program to loop and take readings.

However, now I’m only getting -7.0 as a return value for the other polling functions for temp/hum/dew point, etc.

That return value looks similar to what another user reported here:

Things I’ve tried:
Switching pins (D0,D2). Can’t use D3 - 6.
Switching the DHTTYPE from DHT22 to AM2302.
Creating a new sketch from the library example with the library automatically included to rule out library inclusion issues.

Hardware:
Photon
RelayShield
I have the SMAKN DHT22 that comes with a built in resistor (or two), and some presoldered pins. It was stated to be 3 - 5v capable.

Any other recommendations? Thanks in advance!

Could you provide an image (good resolution to see the exact wiring)?
Then I could copy that setup and try.

Welp, was tired of messing with it, so I gave the SMAKN thing 6v (my bench power supply only has 4.5 and 6

and let the magic smoke out; something fried inside. It was stated to handle 3 - 5.5v, so I guess that’s fair. Amazon is shipping a new one, without the ‘convenient’ pre-soldered resistor(s) and pins.

Thanks for offering to help.

Pitty that you deleted the image, but since I’m a mod, I could still see your problem.
I’d say it was actually the pins not being solderd in. Just having the Photon sitting on the header pins will never give you enough reliable contact to do anything with it.

I didn’t want to waste your time since I’d already fried the DHT22 by that point. As far as the headers, for a better test I should have soldered them on, you’re right, though that Photon is meant for something else not requiring headers. Thing is, when it was attached to my project, the headers were soldered on and I was getting the same thing. Hoping for better results this afternoon. Thanks again!

As far as the headers, for a better test I should have soldered them on

Not just as a test. Without them soldered on, there’s a very very slim chance you’ll be able to take readings at all. Also, I noticed that the D7 LED was on, which it shouldn’t be according to the code. Could it be that there was something else running?

The actual project was soldered, regardless, your advice is sound. I’ll solder my connections when testing in the future.

As far as the code, the image was taken with my project full code, but then I flashed the DHT_SIMPLE and tested that too, but got the same readings.

Thanks for your comments! 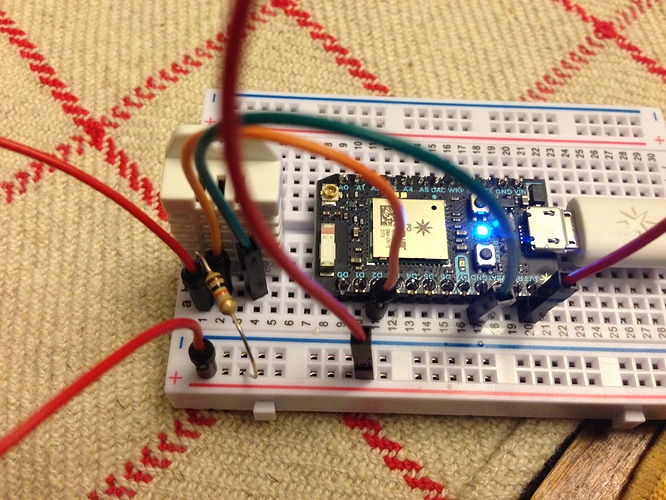 Running a code example from the Piette DHT library from October 2014.

This is a new unit from SMAKN without any pre-soldered stuff. I took @ScruffR and @Moors7 's advice and soldered the headers on, but I’m still getting -7.000000. Pretty sure I have a 10k resistor on there (its hard to tell, but its in #2, pulling signal up to 3.3v). Wired like these here.

Solved. It was the library. I loaded the AdafruitDHT library an code example and it worked like intended.

That’s odd.
The Piettetech library is the most stable one for my DHT sensors, I had lockups with the others.

However, good to know, you got yours running

That’s why I started with it. But I had lockups with it and the example code, and then couldn’t get good data returned from the sensor(s). So I don’t know, the Adafruit one just worked.

Its running like a champ and I was able to finally do install after messing around for a few days figuring this stuff out. Thanks again.

That’s odd.The Piettetech library is the most stable one for my DHT sensors, I had lockups with the others.

I am using both, they are both pretty stable, IMHO.

I had the same problem occur using an AOSONG AM2302 … I found this thread searching for a solution.
In the end, I re-did my breadboard and re-flashed the same code; afterwards it worked perfectly.
My assumption is that one of the hardware connections was not quite right and that was the cause of my problem.