i am connecting 2 WS2812 rgb led to the particle core, as shown in the image below, where the control pin is D7 along with 3.3v and ground connected, I am using the WS2801 library. However the WS2812 led doesn’t light at all. if I connect the led circuit to the arduino board with the same pin, it works as shown in figure 2. 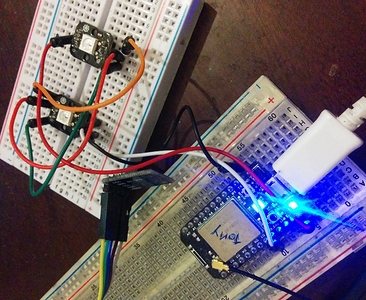 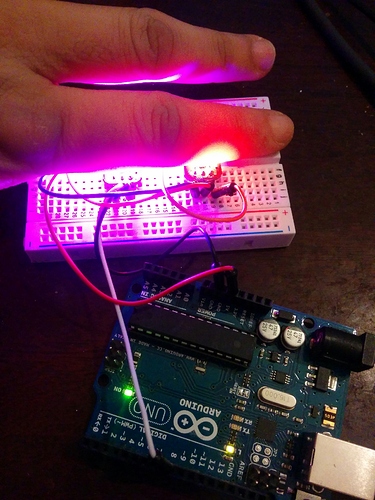 The code is shown as

I’d reccomend you to take a look at this tutorial, might help you out.

Although you say you’ve hooked the board up in the same way on the Arduino, it appears to me that over there, it’s hooked up to the 5V. Considering that they’re 5V devices, that might make a difference

As far as I know the WS2812s are NeoPixels and are driven by SPI .
So led1 and led2 are just the clock and data in pin not a way to control each pixel.

Also if you see you see the line :-

You know that to control it with the library it would have to be strip.whatever() and not the pins directly .

Additionally, I’d recommend using the Neopixel library that’s on top of the libraries tab. That one is probably better supported since that’s what’s being used most. Also, it explicitly mentions support for the LEDs you’re using.
If/when using that, take a look at the provided example to get a feel for the workings of the library before stumbling onto your own path.

Since I like to first check power related issues, I hadn’t yet bothered to check the code (assuming the EXACT same thing was running on the Arduino). The points mentioned by @peter_a should definitely be taken into consideration.

I might be wrong, but NeoPixels only have one control line where the clock timing (pulse-pause-ratio)also carries the data.

WS2812 LEDs are amazing devices – they combine a programmable constant current controller chip with a RGB LED in a single package.  Each LED has one data input and one data output pin. By con…

Yes you are right , just thinking about dotstar .
NeoPixels dont have a clock just rely on strict timing. but you still cant control them with the digitalWrite.

Not with digitalWrite() as it does quite a bit of sanity checking and stuff, but digitalWriteFast(), pinSetFast() and pinResetFast() would be speedy enough but as @Moors7 said, why reinvent the wheel?

BTW: In case you ever wondered why your post sometimes format oddly, this comes from your use of the grave accent ( ` ) instead of the apostrophe ( ’ - the one you’d also use for char literals like '\n') in your “don’t, can’t, …”.
The parts between pairs of grave accents will be formatted as inline code.