I think you are using the Adafruit_AM2315 from WebIDE, @Michele - right?
If so you will find this in CPP-File:

that means that in case of a problem it should output a zero.

So if it works without the Sparkfun Weather Shield and the error message appears after using the Weather Shield, you should follow this trail. Do you like to post your code?

I tried adding the Sparkfun Weather library and the calls to the Weather Shield’s onboard I2C sensors to the simple code. I still got valid humidity. I tried placing the humidity read call at the very top of the weather code right after the am2315 object is defined before any other routines are run. I still get zero humidity from that program.

The am2315 library is looking for a device at 0x5C. But there is a Github post (http://github.com/kizniche/Mycodo/issues/315) claiming that newer AM2315’s use 0x57. So I tried setting
#define AM2315_I2CADDR 0x57
in both programs, but that didn’t change anything. I still get no humidity when running the weather code.

Then I ran the I2C scanner again. Now it’s saying “no devices found” on the standalone Photon, and only the two onboard sensors on the Shield Photon. I’m like, how does that happen? How can it not find the am2315 but I can still get readings from it - unless I’m using it from my long program.

At this point I don’t even know how to troubleshoot this issue.

I think you are using the Adafruit_AM2315 from WebIDE, @Michele - right?

So if it works without the Sparkfun Weather Shield and the error message appears after using the Weather Shield, you should follow this trail. Do you like to post your code?

The error happens only when using my long program, on both the standalone Photon and the Photon Weather Shield. It must be something in the code but darned if I know where, or even where to look.

I’ve posted the code (with my API keys redacted) here:

This code should run on any Photon even without a Weather Shield (though the sensor reads will fail obviously).

So I found a function in the library that supposedly reads both t and h in one call eliminating I2C timing issues. But when I put
readTemperatureAndHumidity(t, h) ;
in my program, it won’t compile:
am2315test.ino:72:36: 'readTemperatureAndHumidity' was not declared in this scope
That code is posted here:
https://go.particle.io/shared_apps/5c043ec99264517dfa0001f3

Why you read the humidity 2x? Could you remark out the second reading, pls? @Michele

Maybe you are also able to include a seriallog-handler to get to the root of the problem?https://docs.particle.io/reference/device-os/firmware/argon/#log-handlers

In getWeather() there is also a double reading:

Could you comment out the for-loop? - I’m not sure if your sensor is really sleeping.
Eventually it will be swallowed when reading the values.

Why you read the humidity 2x? Could you remark out the second reading, pls?

Because there’s a piece in the am2315 datasheet to the effect that the humidity sensor goes to sleep after some period of time and it takes two consecutive reads to wake it up.

I originally had a single read there. That didn’t work either.

That loop was there just to try to get the sensor to respond Originally it was just a single read, which returned zero.

Apparently I’m not the only one to have troubles with this device:

Trying to get an I2C (AM2315) working with Wire Troubleshooting

Hi, Been Googling and haven’t found an answer. I have 2 I2C devices. A SHT1X that is I2C. It works. It does not use the Wire class, the code does the protocol https://github.com/practicalarduino/SHT1x/blob/master/SHT1x.cpp Then I have the AM2315. Using the Wire class, it does not work: This code: https://github.com/adafruit/Adafruit_AM2315/blob/master/Adafruit_AM2315.cpp Other info: Wiring is verified, it’s all good. Pullup resistors in place, etc… Only 1 device on the I2c bus wh…

AM2315 Not working Troubleshooting

I’ve been trying unsuccessfully to get the Photon to read data from the AM2315 temperature sensor. My code is pretty simple. Wire.beginTransmission(0x5C); delay(2); Serial.println(Wire.endTransmission()); This prints 2 every time so the sensor isn’t getting initialized properly. My wiring is ok. I have 10k pullup resistors on the SDA and SCL lines and I have verified the sensor works by reading data via a Raspberry Pi. I tried running the code on the Arduino and it returned 4 instead of 2 but…

I had some issues with waking up the sensor. Not sure exactly what I did differently

but kicking it a few times seems to have helped

So I tried that. Didn’t help me.

Meanwhile, I decided to nail down the I2C address issue. Scoping the wire, I see:

Notice also that there is very little lag in the rising edges, suggesting that pullup resistance is not the issue.

What worked for me is here:

A project for weather sensors around my house. Contribute to ianlewis/weathersensors development by creating an account on GitHub.

A project for weather sensors around my house. Contribute to ianlewis/weathersensors development by creating an account on GitHub.

I’m having trouble reading my AM2315 temperature/humidity sensor. The temperature always works but the humidity always returns zero. Here is a sample of what the I2C bus is doing. SDA is on top, SCL is on the bottom. Notice how there are three spots near the left, center, and right where it looks like the clock stayed high for two cycles. I understand that the clock does not run when there is no data but that doesn’t look like the case here.

But I also see that it looks like this happens every nine cycles, corresponding perhaps to byte boundaries (plus an accept bit). Does anyone understand what this trace is showing? As an I2C noob, I’d appreciate any help.

I have moved your new thread back to this one, since it’s still the same question and double posting is frowned upon.

You had a reply in this thread so there is no use in scattering the same discussion over multiple threads.

Well I actually considered that aspect and decided that this question was more a general I2C hardware issue as it’s about the SCL line and not really the AM2315 in particular.

But I suppose if you disagree then who am I to say anything.

Interesting. I will give that a try. But from your Fritzy diagram it looks like you’ve got 3.3 V on the pullups, not 5 V. Or am I reading it wrong?

Also, if you are using multiple I2C devices, it may be that the 3.3v w/ pullups should go into the breadboard’s side rails per the diagram rather than directly into the one device. I can’t remember if the BMP085 that I had was working per that diagram.

So go figure. I still have no idea why this should work, nor why the I2C scanner doesn’t find this sensor but the pragmatist in me says it’s just time to let it go.

I think the morals here are:

Anyway, mega thanks for replying. Now maybe I can get a good night’s sleep

I still don’t know why the SCL clock looks funny, but that’s probably because I2C hardware experts aren’t particularly going to be attracted to a thread called AM2315 Humidity.

Yeah I think I remember that calling the functions individually didn’t work but never investigated.

The “stretched” SCL is created by an I2C STOP condition which brings the bus HIGH (pull-ups). In that period you will notice the SDA goes from HIGH to LOW while the SCL is HIGH. This is a START condition. The nine (9) LOW-to-HIGH SCL transitions are clocking data presented on SDA. The ninth transition is for the ACK bit. You will note that SDA is HIGH on that ninth clock indicating a NACK. So the device is NACKing the transaction.

it’s usually safer to have them

I think I’m good. The Weather Shield has onboard pullups for I2C:

The “stretched” SCL is created by an I2C STOP condition

OK, thanks very much for the explanation. Do you know of any stand-alone I2C decoders? I know some scopes can do this but mine can’t. Sometimes it’s handy to be able to actually read the wire directly.

Do you know of any stand-alone I2C decoders?

You are looking for a logic analyzer. You can get low cost ones which are clones of Saleae units. I have a DSLogic unit that works quite well. The Kingst logic analyzers seem to be good value as well though I have not tested either.

Great suggestion. I’ve been wanting a logic analyzer for a while but didn’t realize they could decode I2C too. Hopefully Santa will bring me one of these for Christmas!

Cheapest one I found for I2C: 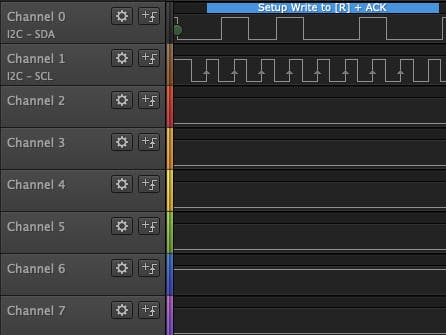