well the datasheet for the X6802 states,
“The XC6802 series is a constant-current/constant-voltage linear charger IC for single cell Lithium-ion and Lithium polymer batteries.” and reading a bit on Ni-MH it seems that they need a specific type “rapid charge” charger so perhaps they will not work. thanks for your insights. i have an electron & boron each hooked to a 3.7V lipo but before buying 2 more for an argon and xenon i wanted to check. thanks.

you may be correct about using the Ni-MH cells but i think i’ll hold off until maybe some long term experience with the charging cycles by another member gets posted about. thanks for your insights on the topic. 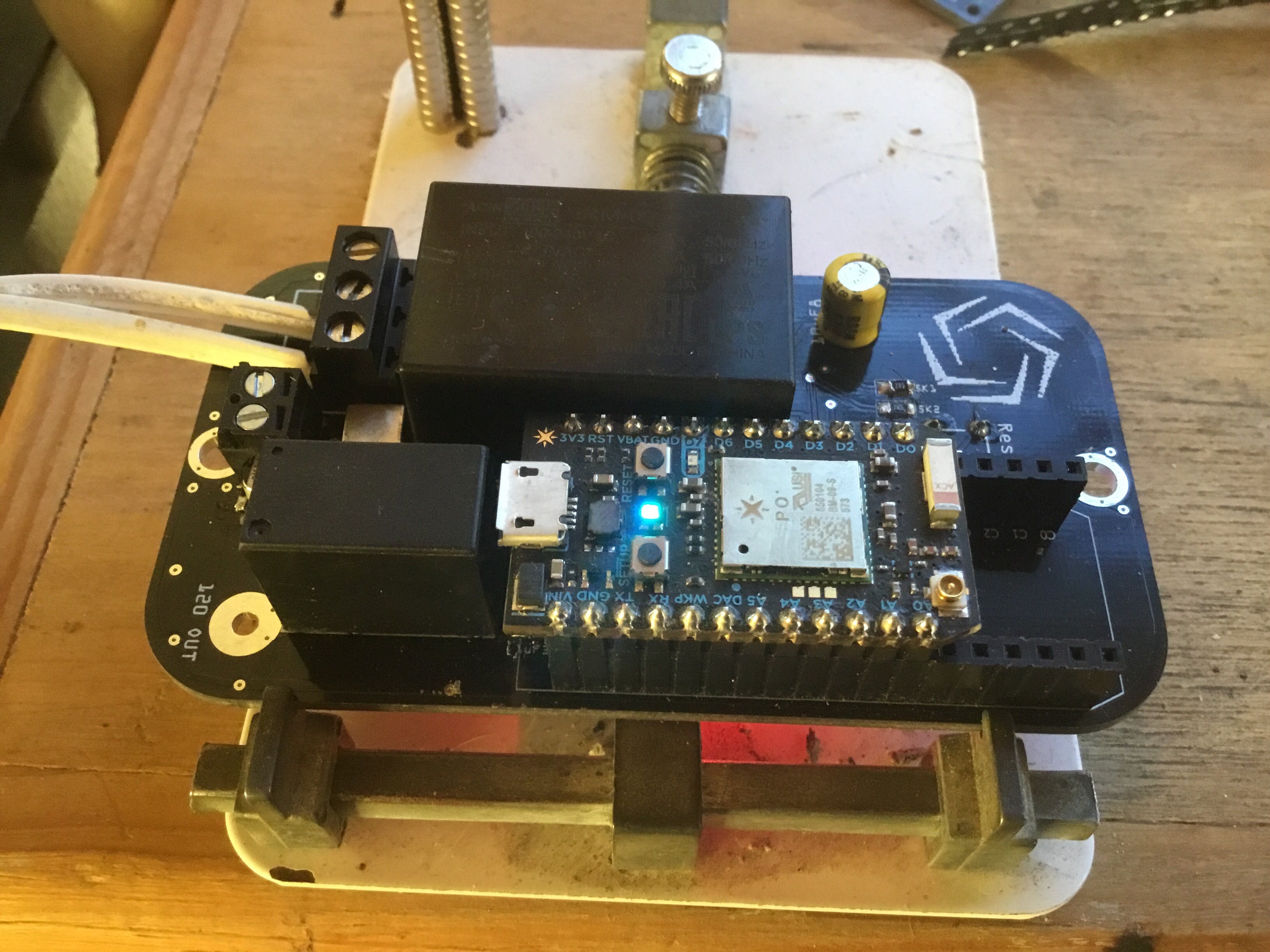 After researching the Sonoff WiFi switch, I decided to build my own switch box mountable 120V input IoT switch. By Jade Perreault.

Sorry about the spelling

With 4.5V on the input and nothing connected to the output, it consumes 0.2mA. So if that’s the standby current draw, it will burn 4.8mAh per day. My original requirement was the batteries last at least a year. In 1 year that’s 1.75Ah and the batteries are around 2.5Ah. That’s just not enough power left over for the Xenon. So I’m pretty much back to square one and have no idea how to power this project. Even the Pololu product discussed on this thread says it has a max quiescent current of 0.1mA, so it’s better but still burning almost an amp-hour per year.

You may have already considered this … if you use a small LiPo connected to the onboard LiPo port (enough to last for 2 x your sleep cycle ~approx) - then use the Pololu (or similar) but pull the /SHDN to 0V with a 1M (experiment a bit here) to default it off. When your Xenon “wakes up” the raise /SHDN to power the board and recharge small LiPo - do your app stuff and once bat is charged (monitor CHG) - then revert to sleep ?

(This is just top of the head thinking - not tested!)

@DevRandom, is your typical operating condition -20 degrees C, or was that just during extreme events?

I still don’t see what’s wrong with 3xAA L91’s (5.4 OCV) to the Li+ Pin for a $15 Smoke Test.
That allows you to use all the available capacity in the (3) L91’s.
If you let out the Magic Smoke, then go with 2xAA and recalculate your Power Budget.
Obviously, you’d leave some capacity on the table with (2) L91’s considering the 2.8V minimum condition req’d.

@ScruffR I did know about the shutdown but that didn’t seem especially useful as I would have no way to control the shutdown pin with the Xenon in sleep mode or unpowered. Shanevanj sheds an interesting idea on that though. Maybe there is some extremely low power device

@shanevanj It’s an interesting idea, and even the smallest LiPo or a supercap will last quite a few wake/sleep cycles. The Pololu board has a 100k pull-up already, so I’d need at most 10k to bring it below 0.4V. It’s a bit more complexity/cost, and I think if I’m adding the LiPo, I could consider extra AA cells in parallel which would still cost less.

@Rftop The typical operating condition will be -20C. I’m reluctant to do the smoke test, because I don’t want to kill a Xenon to find out. But actually 2xAA will give me more power for the xenon after a year than 3xAA with the regulator will. Each cell should give me about 5Wh to 0.8V or 3.5Wh to 1.4V. But 7Wh with no regulator overhead is better than 15Wh with the regulator overhead. But now I’m wondering if it might make more sense to use 4 of the AA cells, 2x2 serial and parallel and connect it directly to Li+. That should easily get me my year of run-time.

But that makes me think, maybe I can get away with Alkaline D cells instead though. -20C will cut their performance drastically. But they’re rated for 23Wh each, so 2 directly to Li+ or 3 through the regulator will give me a ton of power even after losses due to low temperature and the regulator’s waste. Is that a viable option?

I’m reluctant to do the smoke test, because I don’t want to kill a Xenon to find out

I just tried it, since it’s within the Spec’s and I have a box full of Xenons that I don’t use.
5.452 V into the Li-Po Connector worked fine.
I used a power supply and tested at room temperature, confirmed with MM.

IMHO, 3xAA L91’s into the Li-Po connector @ -20C should work fine; no additional regulators, etc.
Just take preventative measures to ensure the Xenon cant attempt to “recharge” the L91’s if someone connects it to USB / power source.

What’s the Xenon’s Sleep Current, with the latest firmware?
I haven’t noticed that on the forum yet.
But if you measure your sleeping current @ -20 degrees C, then that will tell you pretty quick which direction to take for your battery pack for a 1 year life (assuming a low duty cycle).

If you plan on the Xenon waking up on a specific schedule, then Shutdown w/ the EN Pin ( as @ScruffR mentioned) & an external timer will be the best Low-Power solution. I’ve performed a lot of tests (and several posts) with the TPL5111 for a Boron LTE on 0.9.0 that could get you started. The TPL5111 is cheap and easy to implement if your sleep time is <= 2 hours.

I “think” a Xenon will use ~ 1Wh over a year of Shutdown w/ EN pin, but that should be confirmed.
I haven’t tested the Xenon much myself.

Thanks for going to the trouble of doing that test. Room temp is perfect for the test anyway since I’ll be powering and setting up the device at room temp before installing it in the deep freeze and that’s probably the worst case anyway. 3xAA Lithiums should give me plenty of power for the year, without the regulator overhead.

I don’t know about sleep current for the latest firmware, the guide I’ve been using is a February forum thread here Early 0.9.0 Xenon current consumption measurements that puts it under 50uA and leads me to believe 10 seconds on every 10 minutes will give me my year with power to spare. Sampling every 10 minutes is ideal and dropping to 15 or 20 if needed is still acceptable.

I am planning to wake on a schedule. I just read the TPL5111 datasheet. It’s an impressive chip that would work perfectly here if I need the extra power savings. And the Xenon in sleep mode takes about 1500 times as much power as the TPL5111. That’s also the first time I’ve ever seen the quadratic formula used in a datasheet which was interesting. Eventually I want it to log any exposure to light if the enclosure is opened, I was thinking a phototransistor on an interrupt would do that, but for now I’m focused on basic data-logging. It would probably work with the TPL5111 ON pin anyway.

Looking at the datasheets, the L91’s shouldn’t have trouble meeting the current spikes until discharged to ~ 1.35V each, or below.
So “In Theory”: 2xAA might meet your 1-year goals also before you see Brown-out on the Xenon.
That’s straight out of the box, using the Li-Po connector and System Firmware for Stop Sleep mode, no external timer for En Pin, no extra regulator.

I’d try 3xAA myself, but if you didn’t like the 3xAA for any reason, a 2S2P pack (as you previously mentioned) gives you a significant safety factor.

How are you planning on protecting the Xenon from the frost in the freezer ?

I’m planning to put the Xenon in a plastic project enclosure and then put electrical tape around the seam. But one important test I haven’t done is if I can actually connect to the Mesh from within the freezer, I hope the metal shell of the freezer doesn’t block the signal. I can put another mesh node fairly close to the freezer if needed.

Correct me if I’m wrong, but I think the calculation is actually even more in my favor with 3 cells and less with 2

Absolutely. I only mentioned the 2xAA again since 3xAA is very near the Specified limit on the datasheet.

Well, that’s not exactly how it works, to my knowledge anyway.

Once you’re ready to actually calculate a power budget, I’d use watt hours instead.
Especially since we normally can’t operate over the same voltage range that’s used by battery manufacturers to determine their capacity rating.
Also, I don’t think you need to worry about the 85% efficiency you mentioned for the Xenon. The current measurements for the system (external) are still valid.

Take real measurements at your operating conditions, both current and voltage.
Perform the test at both ends of the L91’s operating range that can provide the current required by the Xenon and peripherals.
Take a large enough sample set to comfortably decide on the required Run-time for each wake event (successful Mesh Connect and Publish) from the freezer. This is the most important test, if you decide not to perform the current & voltage test. Example: if the assumed 10 seconds actually averages 30 seconds from the freezer, the rough calc’s would be WAY OFF.

Since the battery voltage isn’t constant over its life, you’re right, I should be looking at Watt-hours. I think my way would have worked (at least for DC) if I could have assumed constant voltages. And good point about the regulator efficiency already being factored in.

My software still isn’t far enough along to take meaningful readings, especially during sleep mode, but I will do it.
Actually, the run-time during the wake event is my biggest issue right now. I’m using a DS18S20 to read the temperature, and for the first minute or so after power-on I get garbled data that fails the CRC check. After that it works flawlessly, but a minute for each on-event is not workable. Plus, of course, that is at room temperature. If I can’t work it out I’ll have to choose a different sensor.
I was planning to note millis() at wake-up and take the difference just before shut down and publish that as part of my status update. Over time that will collect some good sample data.

I’ve made enough progress on my code to do some testing.
I’m measuring wake time by noting millis() right before it goes to sleep each time, and then comparing the time between wake/sleep cycles and subtracting the sleep time I’m taking the rest as wake time. If that method is accurate, I seem to be averaging 3 seconds of uptime each call which seems amazingly good. Sometimes it’s as bad as 5 seconds, the best 0.8 seconds. Is my method reasonable?

I can’t think of a way to measure current under actual conditions since I can’t leave my meter inside the freezer and read it.

One big problem I have though is when the mesh gateway is not available. The when the Xenon wakes up and doesn’t find the mesh netowrk, it stays on blinking green forever, which will drain the battery in a few days. Is there some way to have it timeout and go back to sleep if it doesn’t find the mesh in 5-10 seconds? At least until the high availability mesh becomes available, if the power goes out, I lose the mesh and I’ll only be draining the battery for nothing.

I believe you’d use:

You would manually connect after waking from a sleep cycle, then something like this to limit the connection attempt before performing the disconnection process and going back to sleep to save battery.
if (waitFor(Particle.connected, connectionFail)) {
// do your stuff here

Note: this may change for Mesh, IDK.

For example: This is what I did for cellular, a similar concept might work for you with the proper Mesh Calls and using the best Sleep mode for the Xenon for your case:

Correctly turning off the Cellular? Firmware

This could be interesting - 35nA sleep consumption …